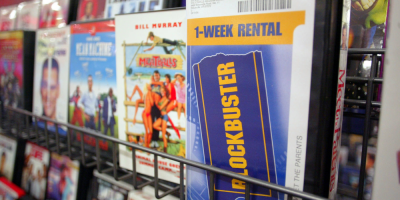 In an ironic twist of fate (as Blockbuster actually had the option to buy Netflix at one point), Netflix is releasing a new documentary about the last existing Blockbuster movie rental location.

Directed by Kevin Smith, The Last Blockbuster will be a nostalgia-filled trip down memory lane that follows the manager of the last blockbuster location and what she has had to do to stay open. The documentary also features tons of comedians and actors like Doug Benson, Paul Scheer, and more.

With even the former CFO of Blockbuster saying that he doesn’t really miss physical DVD renting, it’s no surprise that most people are happily streaming their content instead of having to get dressed, drive to the store, and rent a movie. However, there was something special about walking up and down the aisles of your favourite video store and making the all important decision of which movie to rent.

Whether you miss it or not, The Last Blockbuster should be a fun watch for anyone with memories of Blockbuster in their mind. It will be streaming on Netflix starting March 15th.

Featured image courtesy of the Commercial Observer via commercialobserver.com