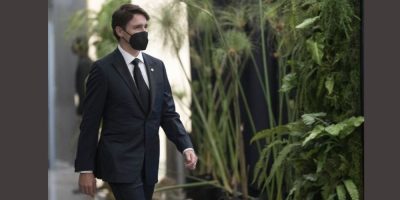 Prime Minister Justin Trudeau promised to defend abortion rights in Canada and around the world on Friday after what he called a “devastating setback” in the United States.

“Quite frankly, it’s an attack on everyone’s freedoms and rights,” Trudeau said of the U.S. Supreme Court’s decision to overturn Roe v. Wade, the 1973 ruling that guaranteed the right to abortion.

“It shows how much standing up and fighting for rights matters every day, that we can’t take anything for granted,” Trudeau said from the Commonwealth summit in Kigali, Rwanda.

Foreign Affairs Minister Mélanie Joly, who joined Trudeau in Kigali, called it a “dark day” and warned the decision will have “a domino effect on other rights,” adding that no country is immune and accusing Conservatives of “shopping for anti-abortion votes.”

Trudeau did not take questions from reporters after making his statement.

She said in a written statement that her party’s position on abortion has not changed and the Conservatives “will not introduce legislation or reopen the abortion debate.”

Jean Charest, a candidate in the Tory leadership race, tweeted on Friday he was “disturbed” by the news. He said while he recognizes there are strongly held beliefs on the issue, “reproductive rights in Canada are non-negotiable.”

Leslyn Lewis, another candidate who describes herself as “pro-life,” tweeted on Friday that “Canada is not the U.S.” She said she expects Canadians to be able to have adult conversations about the topic.

She said her position is that coercive and sex-selective abortions are wrong, and a Conservative party under her leadership would allow free votes for issues of conscience in the House of Commons.

A majority of Conservatives voted in favour of a private member’s bill last year to outlaw sex-selective abortions, but the bill was defeated.

The party’s other leadership candidates have either said that they support the right to choose an abortion or that they would not introduce legislation restricting it.

The Campaign Life Coalition, which holds an annual anti-abortion rally on Parliament Hill that attracts thousands and has supported Lewis’s candidacy, put out a statement praising the court: “We thank God and heartily applaud this decision.”

Reacting to the news on Friday morning, NDP leader Jagmeet Singh said in a statement that “dangerous policies that threaten women’s health and women’s lives must not be allowed to take root in Canada.”

He said the government needs to work harder to improve abortion access for women, especially in rural communities. “The Liberals say the right things about being pro-choice but that isn’t enough,” he added.

The right to an abortion doesn’t exist in Canada in the same way it was enshrined in Roe v. Wade, the landmark decision that served as a rock-ribbed legal scaffold for reproductive rights champions around the world.

Abortion is decriminalized in Canada because of a 1988 Supreme Court decision, but no bill has ever been passed to enshrine access into law.

Though the decision is sending “shock waves” everywhere, the legal ability to have an abortion in Canada is not under threat, said Joyce Arthur, executive director of the Abortion Rights Coalition of Canada.

But her organization is concerned about Americans coming north for abortion care and is advocating for federal and provincial governments to help clinics with more funding because, as Arthur puts it, “even a small number of Americans can overwhelm our system.”

Later on Friday, Joly was asked whether the government would require provinces to provide access to late-term abortions, and if American women could have their abortions funded by Canada. She said they want to take “strong measures” towards better access.

“We will work with women’s organizations across the country to listen to their needs and also work with provinces and territories,” she said in Kigali.

Cara Zwibel of the Canadian Civil Liberties Association noted that while most Canadians have access to abortion services through provincial health care, that is not true in New Brunswick. Publicly funded abortion services in that province have been restricted to three hospitals in two cities. The CCLA filed a case against the N.B. government that is making its way through courts.

Oxfam Canada executive director Lauren Ravon likewise reacted to the decision with concerns about the “enormous challenges” in abortion access for Canadian women who live in rural and remote areas, are in precarious housing situations or face intimate partner violence.

Social media was replete Friday with criticisms of the court’s decision from Liberal and like-minded politicians, including a tweeted statement from Deputy Prime Minister Chrystia Freeland that said she was “shocked and horrified” and “abortion is a fundamental right.”

But advocates such as Arthur have been hoping the government will start “putting their money where their mouth is.”

In May, after a leaked copy of the U.S. Supreme Court’s draft decision was obtained and published by Politico, the Liberal government announced it was spending $3.5 million on two projects to improve abortion access — part of a $45 million pot of money for sexual and reproductive health services they had announced in 2021.

At the time, Trudeau said his government was discussing how to make sure progress on reproductive rights is not reversed by future governments or court decisions, and that enshrining access to abortion with legislation could be one way to do that.

Liberals have made no major strides toward doing that, however, nor have they followed through on an election promise last fall to create Canada Health Act regulations that would penalize provinces for failing to provide access to sexual and reproductive health services.

Health Minister Jean-Yves Duclos told reporters in May such mechanisms already exist, but his officials were looking at reinforcing them in the coming months.

Last year, the Liberal government confirmed it had withheld about $140,000 of New Brunswick’s share of the federal health transfer because it does not fund abortions provided at a clinic in Fredericton.

Banner image: Prime Minister Justin Trudeau arrives at a state dinner with Commonwealth government leader in Kigali, Rwanda, Thursday, June 23, 2022. Trudeau says the U.S. Supreme Court’s decision to overturn Roe v. Wade is “horrific” and his heart goes out to the millions of American women who are now set to lose their legal right to an abortion. THE CANADIAN PRESS/Paul Chiasson

This report by The Canadian Press was first published June 24, 2022.