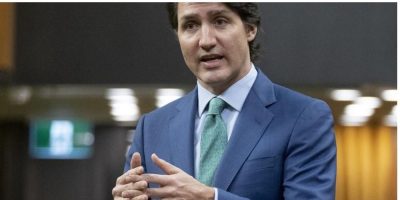 Prime Minister Justin Trudeau said Thursday using the Emergencies Act is a measure of last resort to bring an end to the illegal and undemocratic blockades that have harmed Canadians for nearly three weeks now.

Trudeau told the House of Commons that using the act was not the first, second or even third choice of the government.

“We did it to protect families and small businesses, to protect jobs and the economy,” he said. “We did it because the situation could not be dealt with under any other law in Canada.”

Trudeau’s speech kicked off a heated and loud debate of the use of the Emergencies Act. New powers have been granted to banks and police to freeze bank accounts of participants and bar people from assembling in specific places or joining protests that threaten trade, critical infrastructure, people or property.

It is also now illegal to bring children to within 500 metres of the blockades or provide supplies or property to participants to help them.

The act and the new powers created within it took effect earlier this week but the House of Commons and the Senate must both vote to confirm the use of the act. If the motion fails, the act will be suspended immediately.

The Senate will begin debating the motion Friday. The House debates are expected to stretch for several days.

Trudeau said the act is not prohibiting lawful protest, including by those who disagree with the government’s management of the COVID-19 pandemic, but he said these blockades are not legal, are partly funded by foreign nationals and are threatening Canada’s economy, its trading relationships, and public safety.

Deputy Prime Minister Chrystia Freeland said at a news conference bank accounts have already been frozen and more will be frozen in the coming days. But she refused to say how many, or even declare if accounts could be frozen for people who aren’t participating in the blockade but who donated to the convoy’s various online fundraisers.

The Emergencies Act was passed in 1988 to replace the War Measures Act, which had been used to suspend civil liberties during both of the world wars and the 1970 FLQ crisis in Quebec. The new act has more checks and balances than the old, including parliamentary oversight and a requirement it live within the Charter of Rights and Freedoms.

Interim Conservative Leader Candice Bergen said her party does not support the use of the act because the government has not proven the demonstrations pose a serious threat to Canada’s sovereignty, security or territorial integrity and couldn’t be dealt with under existing laws.

“The prime minister is doing this to save his own political skin,” she said. “But Mr. Speaker, this is not a game. It comes at the cost to Canadians rights and freedoms.”

Bergen said many of those in the protest are neighbours, constituents and Canadians who just want to be heard and “given even just a little respect” by Trudeau.

She repeated her accusation that Trudeau himself was to blame for raising the temperature of the convoy by refusing to meet with them and accused the prime minister of hiding for the first week of the blockade.

That prompted Green MP Elizabeth May to counter that Trudeau wasn’t hiding — he had COVID-19 and was in isolation.

Bergen, who took over as the interim leader Feb. 2 following a caucus vote against Erin O’Toole, supported the demonstration in the early days, posing for photos with participants and dining with some of them at a restaurant in Ottawa. She said reports of hateful symbols and harassing behaviour were the exception within the crowd, not the norm, and asked Trudeau to extend an “olive branch’ out to the demonstrators in a bid to end the impasse.

The Conservatives also pushed a motion asking the government for a timeline to end federal restrictions and mandates, but the motion failed when the Liberals and NDP voted against it.

As the blockade stretched into its second week, Bergen said it was time for the convoy to go home because they had been heard.

On Thursday, Bergen also turned her criticism on NDP Leader Jagmeet Singh. Singh said his party will reluctantly support the use of the act because the blockades are a national crisis, even though the NDP is critical of Trudeau for allowing things to get this far.

Bergen said “history will not be kind to the leader of the NDP or his members on this particular question.”

Singh pushed back at Bergen for supporting the convoy at any point, when it is “no secret that the goal of this convoy, posted brazenly on their website, reiterated as recently as earlier this week in a press conference, was to overthrow a democratically elected government.”

Liberal MP Yasir Naqvi, whose Ottawa Centre riding includes Parliament Hill and downtown Ottawa, said his community “has been held hostage” by demonstrations that are not peaceful. He asked whether MPs who had supported the convoy and encouraged protesters to keep honking would tolerate demonstrators in their ridings, harassing their constituents.