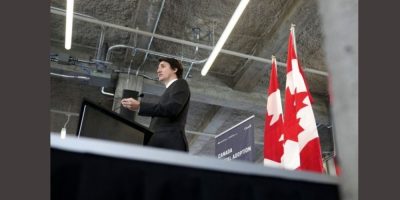 Trudeau will spend next week in meetings in London, Berlin, Riga, Latvia and Warsaw, Poland, saying he is joining partners to stand against Moscow’s aggression and strengthen democratic values.

Allies will also work on countering “the kind of disinformation and misinformation that we know is a facet of day-to-day life these days, but a particularly strong facet of this conflict, this war in Ukraine,” Trudeau said during a news conference Friday.

Canada’s foreign affairs minister met counterparts at NATO headquarters in Brussels on Friday to co-ordinate continuing efforts to sanction Russia for its invasion.

Before the meeting, Mélanie Joly said ministers planned to discuss a Russian attack on a major nuclear power plant in the eastern Ukraine city of Enerhodar.

Russian troops seized the plant, the largest in Europe, after a middle-of-the-night attack that set it on fire and briefly raised worldwide fears of a catastrophe.

Firefighters put out the blaze, and no radiation was released, United Nations and Ukrainian officials said, as Russian forces pressed on with their week-old offensive on multiple fronts and the number of refugees fleeing the country topped 1.2 million.

Trudeau said late Thursday he had spoken with Ukrainian President Volodymyr Zelenskyy about the assault on the power plant.

Following the attack, Zelenskyy appealed again to the West to enforce a no-fly zone over his country. But NATO Secretary-General Jens Stoltenberg ruled out that possibility, citing the risk of a much wider war in Europe.

He said the only way to implement a no-fly zone would be to send NATO planes to enforce it by shooting down Russian aircraft.

“We understand the desperation, but we also believe that if we did that, we would end up with something that could end in a full-fledged war in Europe,” Stoltenberg said.

This report by The Canadian Press was first published March 4, 2022.

— With files from The Associated Press