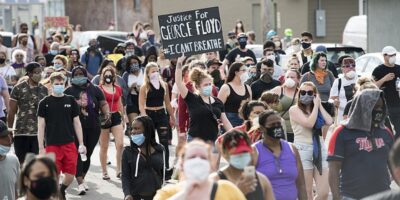 As tensions escalate in the United States, Prime Minister Justin Trudeau was asked to comment on the controversial actions and comments from U.S. President Donald Trump.

The prime minister stared silently at the camera for 22 seconds before commenting on Trump’s threat to use military force against protesters demonstrating over the death of George Floyd while in police custody.

Trudeau was also asked about the message he’s sending to Canadians by refusing to directly comment on Trump’s actions.

After an unusually long pause, Trudeau answered but did not mention the U.S. president by name.

“We all watch in horror and consternation at what is going on in the United States,” he said. “It is a time to pull people together, it is a time to listen. It is a time to learn, when injustices continue despite progress over years and decades,” Trudeau said.

Trudeau was asked again why he refuses to mention Trump by name.

“Canadians need a government that will be there for them, that will support them and that will move us forward in the right direction, and I will do that,” he said.

Related: Some resources to practice anti-racism beyond a hashtag

Trudeau also said Canadians must be aware of the challenges facing black Canadians and other minorities and take steps to address them.

The questions came up during Trudeau’s daily news conference in Ottawa.

Monday, U.S. President Trump had protesters forcibly removed from a park near the White House, so he could attend a nearby photo opportunity.

The state of Minnesota has filed a human rights complaint against the Minneapolis Police Department in the death of George Floyd by a Minneapolis police officer who pressed his knee into Floyd’s neck for almost nine minutes.