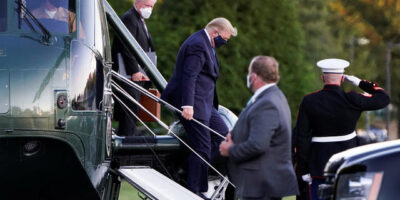 President Trump was transferred Friday afternoon to Walter Reed Medical Center to be evaluated for COVID-19. He walked out to the helicopter and gave a thumbs up to the cameras outside.

White House spokesperson Kayleigh McEnany said Friday that Mr. Trump has “mild symptoms,” and was being transferred to Walter Reed Medical Center “out of an abundance of caution and at the recommendation of his physician and medical experts.”

White House sources said Mr. Trump was suffering from a low-grade fever. The White House physician said earlier he was feeling “fatigued” and would be taking an antibody cocktail.

Mr. Trump will be transferred to a medical executive unit. Matt Nathan, who served as the director of Walter Reed and then surgeon general during the Obama administration, told CBS News that the unit is run by a dedicated staff of doctors, nurses and technicians who will switch over from their daily duties to care for the president. It has communications, eating facilities, Secret Service spaces, lodging for family members and office space.

Vice President Mike Pence, who would take over for Mr. Trump if he was incapacitated or deemed unable to carry out the duties of the presidency, said Friday he had tested negative for the virus. The last time the 25th Amendment, which lays out the line of succession, was invoked, was in 2007 when President George W. Bush was sedated.

Democratic nominee Joe Biden, who was with Mr. Trump at the debate on Tuesday, said Friday he and his wife had tested negative for the coronavirus. The Biden campaign halted negative ads on Friday, and Biden tweeted a call for unity.