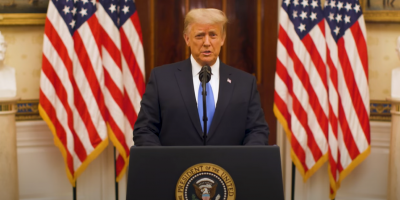 President Trump released a farewell address on Tuesday in his final full day in office as he attempts to cement his legacy, after the assault on the Capitol that followed weeks of his false claims about the election and after he became the first president in history to be impeached twice. Mr. Trump is scheduled to depart the White House at 8 a.m. on Wednesday.

Mr. Trump’s recorded address touched on themes his administration and campaigns have pushed from the beginning, including American greatness and reaching the forgotten man and woman. The outgoing president tried to make the case that he’s kept his promises.

“We did what we came here to do, and so much more,” Mr. Trump said.

The president did acknowledge the new administration taking over the White House, but did not mention President-elect Joe Biden by name. He has yet to call Mr. Biden the president-elect.

“This week we inaugurate a new administration and pray for its success in keeping America safe and prosperous. We extend our best wishes, and we also want them to have luck — a very important word,” Mr. Trump said in a speech that was clearly scripted but with small insertions of Trump flair.

Mr. Trump thanked his family, the Pences, his chief of staff Mark Meadows, the Secret Service and law enforcement.

“Most of all, I want to thank the American people,” Mr. Trump said. “To serve as your president has been an honor beyond description.”

Mr. Trump said it “never failed” to move him when Americans flocked to wave at his motorcade, not just to see him but out of honor for the country.

The president did mention the violent attack on the nation’s Capitol, even as he has denied that his rhetoric was remotely responsible for it.

“All Americans were horrified by the assault on our Capitol. Political violence is an attack on everything we cherish as Americans.  It can never be tolerated,” the president said in his address.

Mr. Trump reminisced on his policy agenda items, from withdrawing from the Paris climate accord to replacing the North American Free Trade Agreement, to increasing the child tax credit. He also touted his foreign policy, saying he’s especially proud to be the first president in decades to start no new wars.

“I did not seek the easiest course. By far, it was actually the most difficult,” Mr. Trump said, claiming he sought the tough path for the American people.

Mr. Trump is bucking the tradition of attending his successor’s inauguration, instead leaving the White House Wednesday morning for a farewell ceremony at Joint Base Andrews. The White House sent out invitations for an 8 a.m. ceremony.

“Now, as I prepare to hand power over to a new administration, at noon on Wednesday, I want you to know that the movement we started is only just beginning. There’s never been anything like it,” Mr. Trump said in his address. “I go from this majestic place with a loyal and joyful heart, an optimistic spirit, and a supreme confidence that for our country, and for our children, the best is yet to come.”