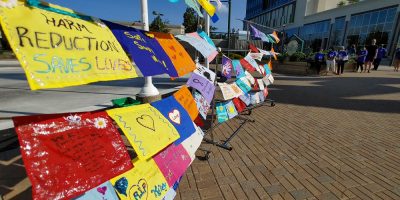 Pushing the message of no more stigma and no more shame, International Overdose Awareness Day was marked at Barrie City Hall on Monday morning.

Supporters of those dealing with addiction and those who have lost family members to overdose gathered with Mayor Jeff Lehman, behind a backdrop of small flags with messages of hope.

“We are not going to forget the victims,” said Lehman.

International Overdose Awareness Day is a global event held on Aug. 31 each year and aims to raise awareness of overdose and reduce the stigma of a drug-related death, according to a statement posted on the website of the Simcoe County Branch of the Canadian Mental Health Association.

It also acknowledges the grief felt by families and friends remembering those who died or had a permanent injury as a result of a drug overdose.

“We resolve to play our part in reducing the toll of overdoses in our community, which is suspected to have claimed the lives of more than 45 Barrie and area residents between January and September of 2020, together with countless more affected forever,” said the mayor in his proclamation.

The event was attended by Christine and Tim Nayler of Barrie, who created Ryan’s Hope in memory of their son, Ryan, who died of an accidental opioid overdose in November 2020.

“When Ryan died, a part of me died with him,” said Christine.

From his death, the family created Ryan’s Hope, an organization providing breakfast and providing community and connection to Barrie’s homeless population. Ryan’s parents wanted to shine a spotlight on the intersections of homelessness, addiction, and mental health.