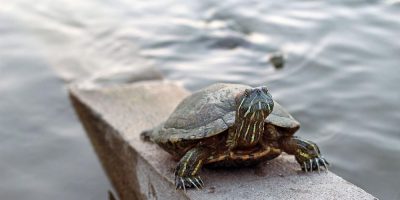 With the arrival of World Turtle Day Monday, May 23rd, the Canadian Wildlife Federation (CWF) and Scales Nature Park are once again calling on drivers to join the effort to help reduce road mortality affecting Ontario’s at-risk turtle populations.

“Reducing the number of turtles killed on roads is critical to species survival,” said James Pagé, species at risk and
biodiversity specialist with CWF. “Every death of a nesting female is a huge blow to the recovery of turtle
populations because they don’t start reproducing until they’re 10 to 20 years old. We need to stop the carnage
happening on our roads each spring.”

To reduce road mortality rates in areas where turtles are often found on Ontario roads, Pagé suggests exercising
caution is the easiest thing drivers can do to avoid hitting turtles. “We’re asking drivers to slow down near
wetlands to avoid a collision, or even stop when safe to do so and move the turtles across the road,” he said.

In Simcoe-Muskoka, road mortality is the number one cause of death of many species of turtles found in the
region. Since 2013, the Saving Turtles At Risk Today (S.T.A.R.T.) project, a partnership between CWF and Scales
Nature Park, has monitored roads to record and reduce mortality.

More than 2,000 turtles have been found dead on roads in the area over the past few years, with more than 1,500 safely removed off roads in the same period.

Additionally, over 56,000 hatchlings have been released back into the wild since the S.T.A.R.T. project began.

According to S.T.A.R.T. project director Jeff Hathaway, the public can help by calling or texting the S.T.A.R.T. Turtle Hotline, 705-955-4284, when they see turtles in the area. “We’re particularly interested in rare species, nesting females, and any injured or dead turtles. When possible, we’ll send a project team in response to the call.”

Resources to teach drivers how to safely move turtles across the road are available on CWF’s HelpTheTurtles.ca