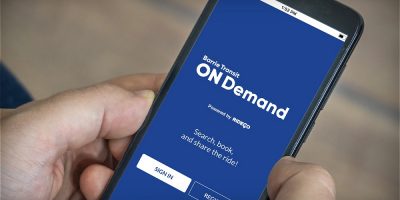 Barrie City Hall says a successful pilot project spells the end of its most underperforming bus route. It will be replaced by an on-demand service instead.

The City says it will discontinue Route 11 and replace it with a Transit ON Demand service model. The new model will allow riders to make trip requests via a free mobile app.

There will be no fixed schedule or route; riders simply select their trip start and end times, and available departure times. The app will let riders know when their bus will arrive and how long the trip will take. Trips can be booked up to seven days in advance. “It’s basically servicing an area that for the most part is a low demand area in terms of transit users,” said Director of Transit Brent Forsyth. “But you’re able to expand that area and be very flexible and accommodating to individual needs, while still providing that essential service.”

This comes following a Transit ON Demand pilot project that commenced in August of 2020, servicing an area from Huronia Road and Lockhart Road to Bayview Drive and Little Avenue. The city says the pilot was a success, with riders receiving faster trips, shorter wait times, and reporting high satisfaction. The cost of the on-demand service is comparable to that of running a conventional bus line, but the city says it can cover more area resulting in more efficient service.

Route 11 was launched in 2016 to service the south-end Lockhart subdivision, connecting it to the Park Place Transit Hub. Prior to the pandemic, route 11 saw an average of just five riders per hour.

The last day for service on route 11 will be Saturday, February 20.