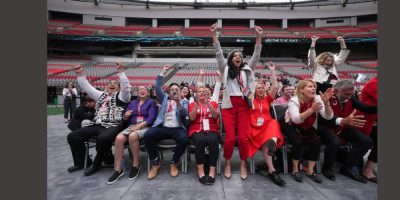 By Gemma Karstens-Smith in Vancouver

The 2026 World Cup is coming to Vancouver and Toronto, but fans in Edmonton will miss out when Canada, the U.S. and Mexico co-host the men’s soccer tournament.

Edmonton also made a bid to be a host.

“We did everything we could to get these matches to Edmonton, because we know we’re a great host city,” said Edmonton Mayor Amarjeet Sohi.

City officials worked late over the last couple of nights to assure FIFA that Edmonton could host games, he added.

When the Alberta government announced $110 million in funding for the bid earlier this year, it stated that Edmonton had to host at least five games, more than the bid book called for.

“We assured FIFA that if there were any doubts on the commitment from the city, or the conditions from the province, that we’d work with FIFA to create flexibility,” Sohi said.

“It is unfortunate that soccer fans will not experience the beauty and vibrancy of Edmonton and our province as a whole,” he said.

“Alberta’s government worked hard and committed a significant financial sum to help the bid along. Our province has hosted countless world-class sporting events. Commonwealth Stadium is the biggest facility in Western Canada and would play an excellent host.”

Canada and Mexico are each expected to host 10 games, with the other 60 going to cities across the U.S. How many will matches will be awarded to each city remains to be seen.

B.C. negotiated five “pre-matches” in addition to games that are part of the official World Cup schedule, said Melanie Mark, the province’s minister of tourism, arts, culture and sport.

B.C. pulled out of contention back in 2018 with Premier John Horgan citing the unknown costs of hosting the event. The province jumped back in last summer, a decision Mark said was based on the impact of the COVID-19 pandemic.

“(B.C. Place) has been empty for two years because of the pandemic and we have a chance to invite those visitors here to come and stay in our hotels and go to our restaurants and shop and visit,” she said. “We see this as an investment for the future and it’s going to pay off.”

Vancouver’s B.C. Place was first opened in 1983 and is home to the B.C. Lions of the CFL and Major League Soccer’s Vancouver Whitecaps. It has a capacity of about 54,000 and has hosted several major sporting events, including the opening and closing ceremonies of the 2010 Olympics, and the 2015 Women’s World Cup, which saw more than 50,000 fans at the championship game.

The stadium’s artificial turf was replaced in January but grass must be installed before it can host World Cup games in 2026.

The cost of the renovations have not been calculated, Mark said, but B.C. is expecting to spend between $240 million and $260 million on hosting the tournament.

“We know that there’s affordability challenges, and when you make investments like this, we have also done the math that there’s going to be a return on that investment,” she said. “And we’re looking at $1 billion coming to B.C.”

In Toronto, the CFL’s Toronto Argonauts and Toronto FC of MLS both call BMO Field home. The stadium was originally built as a soccer venue and has a capacity of about 28,000.

Maple Leaf Sports and Entertainment — which owns TFC, and the Argos, as well as the Maple Leafs, Raptors and Marlies — has said the stadium will be temporarily expanded to meet FIFA’s minimum capacity of 40,000.

A report presented to Toronto city council this spring pegged the cost of hosting World Cup games at $290 million. BMO Field is owned by the city of Toronto but managed by MLSE.

Toronto Mayor John Tory watched the announcement at a local bar, erupting in applause with the rest of the crowd as his city was announced as a World Cup host.

Tory framed the World Cup as a chance to build Toronto’s legacy, saying millions of people will tune into watch the games, and thousands more will descend on Toronto to watch in person.

“This is as much about the economy as it is about sports,” he said. “And our opportunity to build this city up in terms of what is already a good reputation, to make a great reputation and get the best in the world to come and live and invest here in what I think is the single greatest place they could come in the world to do business.”

Montreal dropped out of Canada’s bid last August after the Quebec provincial government withdrew its support, citing cost overruns that would have been difficult to justify to taxpayers.

— With files from Jordan Olmstead in Toronto and Steven Sandor in Edmonton.