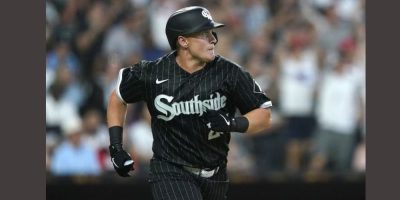 By Jay Cohen in Chicago via The Associated Press

Andrew Vaughn needed a triple for the cycle when he came to the plate in the sixth inning.

He settled for another single — and a perfect night at the plate.

Vaughn matched a career high with four hits, including a solo homer, and the Chicago White Sox celebrated Tim Anderson’s return with an 8-7 victory over the Toronto Blue Jays on Monday.

“One through nine, we can all hit. Even the guys on the bench can all hit,” Vaughn said. “If we start stringing that together, then good things will happen.”

Luis Robert and Josh Harrison also homered as Chicago opened a seven-game homestand with its fifth win in seven games.

Anderson had two hits in his first big league game since May 29. He was activated from the 10-day injured list after being sidelined by a strained right groin.

“I was seeing the ball real well, so if I just stay right there where I’m at, just continue to keep pushing, I’ll be in a good spot,” Anderson said.

Toronto lost for the fourth time in five games. Raimel Tapia and Cavan Biggio each hit a two-run homer for the Blue Jays, but José Berríos (5-3) was tagged for six runs and nine hits in four innings.

“He was missing arm-side, so all his breaking pitches were on the heart of the zone,” manager Charlie Montoyo said, “and he paid the price for it.”

Biggio’s first homer of the season trimmed Chicago’s lead to one run in the ninth. But Joe Kelly then retired George Springer and Bo Bichette to close out his first save this season.

Toronto’s rally fell just short after it erased an 8-3 deficit on its way to a 10-9 victory over the New York Yankees on Sunday.

“It happened again. Our offense came back, but it’s tough to do that every night when the other team’s scoring that many runs,” Montoyo said.

Harrison put Chicago ahead to stay with a two-run shot in the second for his first homer with the White Sox. Robert added another two-run shot on a 436-foot drive to left in the third, and Vaughn made it 6-2 with his seventh homer moments after Anderson was picked off first in the fourth.

“It was a rough night for me,” Berríos said.

Vaughn also doubled home Anderson in the first, singled and scored in the third and singled in the sixth. He is batting .415 (27 for 65) in his last 15 games.

“I mean his stroke today was as pure as it could be,” White Sox manager Tony La Russa said.

Chicago right-hander Lance Lynn (1-0) was charged with five runs, three earned, and four hits in five-plus innings in his second start this year. He missed the season’s start because of right knee surgery.

White Sox: To make room for Anderson on the active roster, 3B Yoán Moncada was placed on the 10-day IL with a strained right hamstring. Moncada left Friday night’s 13-3 loss at Houston in the third inning. … OF Eloy Jiménez is slated to restart his rehab with Triple-A Charlotte on Tuesday. The slugger had surgery April 26 to repair a torn hamstring tendon behind his right knee. His first rehab period in the minors was shut down because of leg soreness.

Right-handers Kevin Gausman (5-6, 3.21 ERA) and Dylan Cease (5-3, 2.91 ERA) pitch on Tuesday night. Gausman is 0-3 with a 6.75 ERA in three June starts for Toronto. Cease led Chicago to a 5-1 victory at Detroit last week, striking out eight while working five innings of one-run ball.