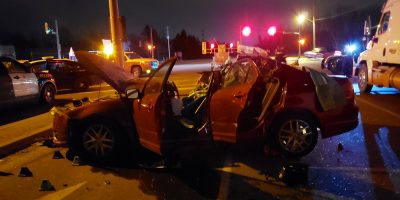 Provincial police are investigating the circumstances leading to a fatal collision in the Georgina area.

The collision occurred on Highway 48 at Ravenshoe Road at around 7:15 p.m. Monday; the OPP say a transport truck was stopped at a red light when it was rear-ended by a car. While a shooting was reported to police in the area of Ravenshoe and Woodbine Avenue at around the same time, it is unknown if the two incidences are connected.

A 27-year-old passenger of the car was pronounced dead on scene, while the 34-year-old driver was taken to hospital with critical injuries. The truck driver wasn’t hurt in the crash.