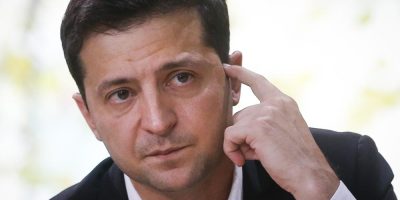 Ukrainian President Volodymyr Zelensky has become the face of his country’s spirited defense against Russian aggression. Throughout the conflict, he has sought to reassure his people by providing selfie-style video updates in Ukraine and even offering words of encouragement during dire moments.

“Strong…powerful…brave”: In a video address on Saturday, Ukrainian President Volodymyr Zelensky reiterated that Ukraine’s citizens will not back down from Russian aggression. https://t.co/PQqwJkzgsp pic.twitter.com/0ccj89uPfT

In spite of his calming presence, CBS News foreign correspondent Holly Williams reported Monday there are “grave fears” for Zelensky’s safety. Zelensky himself said he and his family are Russia’s top targets. Yet, even in the face of danger, he reportedly told U.S. officials, “I need ammunition, not a ride” after they offered to transport him to safety – and it has become a signature tagline associated with the president.

As anti-war protests worldwide popped up in many major cities, he has become a resistance symbol against Russian President Vladimir Putin at those rallies. But before he got into politics, Zelensky was used to the spotlight in the homes of Ukrainians.

From TV president to real president

Zelensky was a popular actor and comedian before leading the country of 44 million people. He was known for his role on the TV comedy “Servant of the People” where he played a foul-mouthed teacher who unexpectedly becomes president after a video of his rant against corruption in the government went viral.

He ran on a similar platform while running for office, embraced the name of his show for his party’s name and defeated former Ukrainian president Petro Poroshenko in a runoff in 2019, with more than 70% of the vote.

More than a decade before he became president, Zelensky won the first season of Ukraine’s version of “Dancing with the Stars” in 2006. A clip of his different dances on the show went viral over the weekend.

so apparently Zelenskyy won the Ukrainian version of Dancing with the Stars in 2006 and the tape is even better than whatever you’re imagining pic.twitter.com/L1gnKD2ISr

The 44-year-old father of two children grew up in Kryvyi Rih, which is located in southeastern Ukraine. The wartime president speaks Russian fluently and partly ran on platform that he could negotiate peace with Russia.

He is also Jewish and had family members die in the Holocaust. His grandfather fought in the Soviet Army against Nazi Germany.

Russian President Vladimir Putin and his aides have accused the Ukrainian government of being “neo-Nazis,” which some believe was as a way for Putin to justify its attacks on the country. Zelensky fought back against those claims.

“The Ukraine on your news and Ukraine in real life are two completely different countries — and the main difference between them is: Ours is real. You are told we are Nazis. But could a people who lost more than 8 million lives in the battle against Nazism support Nazism?” he said in a video Thursday addressed to the Russian public, according to Politico.

“How can I be a Nazi? Explain it to my grandfather, who went through the entire war in the infantry of the Soviet army, and died a colonel in an independent Ukraine,” he said.

As attacks against Ukraine continue, Zelensky called on the European Union to urgently consider admitting his country as a member of the bloc on Monday while talks came and went between Ukrainian and Russian officials.