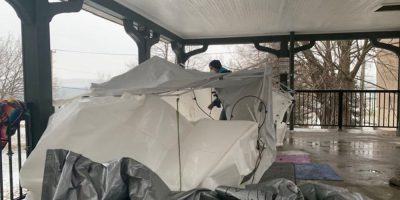 Wind-blown flurries swirled in the air as a group of people dismantled a makeshift warming centre in downtown Barrie.

The tarps began to be removed around noon on Sunday following a visit from Barrie police. As the structure was taken down, a police car sat parked across the street.

A downtown business owner who assisted with the warming centre inside the gazebo at Sam Cancilla Park, on Dunlop Street East, told Barrie 360 police asked them to remove the tarps following a public complaint.

On the HaboHaso Street Ministry Facebook page, a message was posted to the site about the removal of the warming centre.

“WE HAVE BEEN SHUT DOWN BY BARRIE POLICE. pastor Andy was ordered by Barrie Police to dismantle and remove all materials. We obeyed without incident. pastor andy has no comment at this time. Please allow a little recovery time, and we will be right back out there as always helping and loving our downtown family. I love you all so much, and I promise not one single dollar of what you have given has been lost. ALL our supplies/materials/donations have been saved and stored!!! Ready to pick up where we left off, every day, saving lives, bringing warmth, comfort, hope, and love. I am devastated today, but I know Father will use this to speed things up for our suffering family. If you are outraged like me, express it to the system. Bless you. I will be back,” read the post.

Harris has led the charge in conjunction with the John Howard Society Simcoe Muskoka and the Gilbert Centre to establish a warming centre downtown. A potential property fell through due to fire code issues.

The City of Barrie had a warming centre in the downtown bus terminal on Maple Avenue last winter, but not this season.

At council general committee on Monday evening, Harris has said she will introduce a motion that the city and County of Simcoe split the $28,000 cost for staff at a warming centre, when one is established. The funding would last until the end of March.