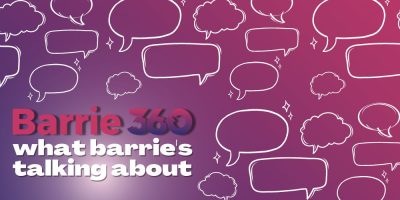 Here we are again with another episode of What Barrie’s Talking About — a podcast to help you stay up to date with what’s happening in Barrie, Ontario.

This Week On What Barrie’s Talking About

1. Local Singer Joins AbbaFab For A Show In Hamilton

Do you like Abba? Do you have a fan on your Christmas list? Abba Tribute show AbbaFab will be in Hamilton early in the new year and Barrie native Julia Davies saying “I Do I Do I Do I Do” to being part of the group.

Keeping things musical, Barrie-based Glowing Hearts charity has received a 6 thousand dollar grant from Musicounts, Canada’s music education charity, which believes music can transform the lives of young people. Barrie 360s Will Konken learns more about Glowing Hearts and how the MusiCounts money will be used.

It may be on a smaller scale, but the step-over toeholds, forearm smashes and flying elbows are every bit as real as WWE when Barrie Wrestling takes to the ring. Barrie 360’s Ian MacLennan spent some time on the ropes with two of the main players

A new, inclusive, playground is being built in Painswick. It will host a variety of imaginative and inclusive features, accommodating sensory, physical, and cognitive disabilities to enable kids of all abilities to play side-by-side. Will Konken spoke with Ward 9 councillor Sergio Morales

The CUPE Strike, The Human Drive, Inflation, and More!