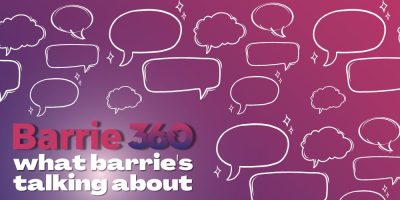 Welcome back to another week of What Barrie’s Talking About from Barrie 360. A podcast that brings you the stories that affect you and the city.

On this week’s episode, we talk about the new housing plan with Jeff Lehman, Christmas Cheer, how not to get lost in the woods, up and coming musician Anna Goldsmith and more.

Jeff Lehman talks about the housing plan coming out of Queen’s Park and why it’s not as simple as the Premier and the Housing Minister make it sound.

2. 3 Words That Will Help You Not Get Lost In The Woods

With hunting season underway and hikers on the many trails in Simcoe County, it’s easy to become disoriented. Southern Georgian Bay OPP Constable David Hobson talks with us about the What 3 Words app and how it is helping first responders.

Anna Goldsmith is an up and coming musician from Stroud who is hoping to make a difference with her music. MJ had a chance to sit down with Anna and chat about her new single.

Christmas is coming and that means our community is coming together to help those in need. Ian MacLennan chats with the chief elf herself, Christmas Cheer president Steph Quenneville, to find out how much is needed and the impact the program has on families.

WHAT TO EXPECT FROM THE HOUSING MARKET, SAVING ON NATURAL GAS AND BARRIE’S STRONGEST MAN