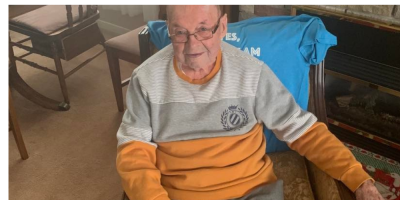 William Snow admits he didn’t realize when he enlisted in June 1942 what he was getting into.

The Second World War veteran, at 99-years-old, lives alone in his Barrie home.

Mounted on a wall is a small cabinet displaying his war medals, a picture of himself as a soldier, and his affection for his late wife.

To Snow, the medals have meaning to him based on a sense of duty.

Snow could have served with the British Armed Forces. He was born in Newfoundland, and he was told if he signed up there was no option to serve Canada. Newfoundland did not join Confederation until 1949.

“I was the only son. As you know, my mother wanted to hang onto me,” Snow explained. “If I stayed in Newfoundland I was told I would join the English forces. That’s something I didn’t want to do, so I decided to come to the mainland and I joined the army.”

Snow, like many war veterans, wasn’t one to go too deep into his service to country, and on several occasions stopped in the middle of a conversation, his cue that he was done talking about a particular situation.

He spent 10-months in England as a driver and training officers. As a member of the First Canadian Radar Battery, his service also took him to France, Belgium, Holland, and Germany. His duties included driving a truck and spotting targets for artillery.

While hesitant at times to open up about his service, Snow did visit local schools prior to the pandemic to talk to students about the Second World War. In a previous interview, Snow indicated he enjoyed taking questions from the students, though he now feels even if he isn’t there to talk about the war, everyone should already know what happened.

“I don’t know. I mean, I shouldn’t have to do that. I think it should be already known to the world now what happened. That’s the way I feel about it.”

When the war ended, Snow returned to Toronto, the city where he enlisted, where he got married and had his children.

After about 10-years in Toronto, Snow’s work took him to different parts of Ontario as a contractor, and he did quite a bit of cottage building in the north.

“My wife and I developed a subdivision, which I’m quite proud of, in Port Sydney. We got the privilege to name a couple of streets.”

Looking back on a life well-lived, Snow counts his blessings.

“I have had a busy life. I have been very, very fortunate,” he reflected. “I think I did okay.”