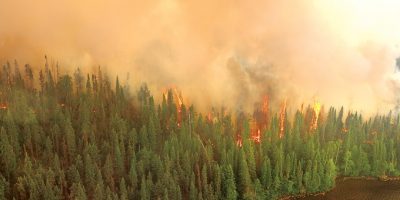 Where there’s smoke there’s fire, and the smoke blanketing parts of southern Ontario comes from forest fires raging in the northwest part of the province.

Environment Canada continues with an air quality advisory for our region.

“High levels of air pollution due to smoke from forest fires are possible today. Smoke plumes may move over southern Ontario from forest fires in northwestern Ontario. Air quality may deteriorate if the smoke descends to ground level,” according to the statement that was updated on Monday morning.

Emergency preparedness meteorologist Peter Kimbell says the smoke and hazy conditions come in waves, so there are areas of worse air quality than others.

There was a strong smell of smoke in Barrie for a part of Sunday afternoon and evening, but the air quality improved overnight. The fluctuation in air quality is expected to continue for the next few days.

“We occasionally smell smoke when everything lines up,” says Kimbell. “When there are lots of forest fires and the wind gust is from the northwest to the southeast, but it doesn’t happen very often.”

He expects the potential for poor air quality is going to persist for a lot of this week.

“I can’t guarantee the advisory will remain in effect all week but the wind direction is going to be northwest for some time. The potential for poor air quality is there,” says Kimbell.

The poor quality can mean health risks for some.

“If you or those in your care are exposed to wildfire smoke, consider taking extra precautions to reduce your exposure. Wildfire smoke is a constantly-changing mixture of particles and gases which includes many chemicals that can be harmful to your health” says the advisory.

“Individuals may experience symptoms such as increased coughing, throat irritation, headaches or shortness of breath. Children, seniors, and those with cardiovascular or lung disease, such as asthma, are especially at risk.”

As of Monday morning, there were 149 active fires in northwestern Ontario and 48 are not considered under control.