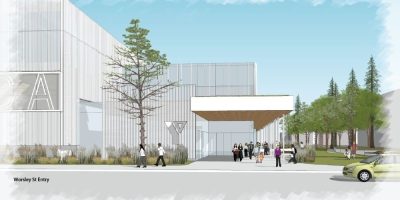 The YMCA of Simcoe/Muskoka continues to search for a home sweet home, preferably in downtown Barrie.

CEO Jill Tettmann says the organization is open to making sure the YMCA achieves its vision for the project which is a community hub that is inclusive of childcare and transitional youth housing, and other supports through a partnership with Royal Victoria Regional Health Centre.

Initially, the YMCA was going to build in the area of Bradford and Dunlop Streets, at the former Barrie Central Collegiate site, but a deal with HIP Developments fell through when the builder revised its site plan and the YMCA lost its chance to front Bradford Street.

Next up was a parcel of city-owned land known as the H-Block on Worsley Street, adjacent to the downtown Barrie Public Library, but that lot fell off the radar when costs ballooned to $90 million, including underground parking.

“We are continuing to explore a number of different options,” says Tettmann. “We’re really open at this point to look at every potential option that is available, and we have a number of people that have come forward with different site options to us.”

She says the YMCA is building that list and doing an analysis of each of the options that come forward.

“We really want to make sure that when we look at building, we’re building in the most fiscally responsible and sustainable way,” Tettmann adds.

The clock is ticking, something Tettmann is well aware of.

The YMCA received a $29.9 million grant from the Ontario government, and the money must be used by March 31, 2027. Tettmann says this means they must have a site finalized by spring 2023.

“Once we find a site there is quite a bit of due diligence that we need to do on the site, which is probably a good year and why we said a shovel in the ground by 2024. That gives us two-and-a-half years to build, which again is quite tight.”

The County of Simcoe has ponied up $2.5 million to the project, and while there has been no money from the City of Barrie, Tettmann says it is likely the YMCA will be seeking support.

The not-for-profit has already raised nearly $5 million from community donors, though its been what Tettmann calls a “quiet campaign.”

“We haven’t launched a more public campaign until we have a site we’re campaigning for,” she explains. “But it’s on our website at https://100reasonsy.ca/, so it is active and anyone can donate to this project.”

Banner image – supplied : The YMCA of Simcoe Muskoka had picked a site on city-owned property known as the H-Block in downtown Barrie to build, but the cost became too expensive