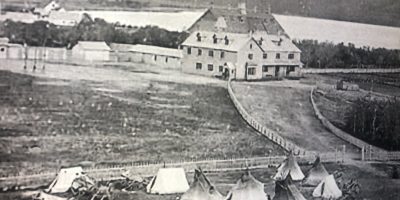 The Cowessess First Nation says the remains of 751 people have been uncovered at the site of a former Saskatchewan residential school.

The discovery of these unmarked graves is the largest found in Canada, eclipsing the tragic discovery of the remains of 215 children at a former school in British Columbia just weeks ago.

Cowessess First Nation Chief Cadmus Delorme was joined by representatives of the Federation of Sovereign Indigenous Nations (FSIN) on Thursday morning to make the announcement. Chief Delorme said there may have been headstones at this site prior to 1960, but that the Catholic Church removed them. “We are treating this like a crime scene at this moment,” he said. The majority of the remains discovered were those of children, while adults were also buried there.

The former Marieval Indian Residential School was built in 1899 by Roman Catholic missionaries and was funded by the federal government as of 1901. The government overtook the administration of the school in 1969, while the school was turned over to the Cowessess First Nation in 1987 and was subsequently closed in 1996.

The federal government has committed $27 million towards First Nations communities to help identify and investigate burial grounds across the country, while the Ontario government recently announced a $10 million fund towards preserving and commemorating such sites within the province.