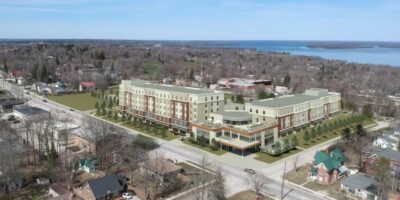 Nobody at a recent Simcoe County Council committee-of-the-whole meeting doubted the need for more affordable housing but there was enough of a hang up over the $80 million cost that the project was sent back to staff for more information.

There were issues around costing, financing and fundraising.

The proposal is to build 130 affordable housing units and a social services hub on the former Orillia District Collegiate and Vocational Institute on West Street North.

There would be one, two and three-bedroom units at a cost of between $770 and $1,000 per month, and bachelor units for vulnerable populations for $590 per month.

Staff said the commercial side will include Simcoe Muskoka Family Connexions, the VON Adult Day Program, Ontario Works, an EarlyON Child and Family Centre as well as partner agencies. A community kitchen and green spaces have also been included.

The hard sell for the mayor is the $18 million that would be Barrie’s share of the project. Lehman said he would have a tough time selling the cost to city council and residents without more information. He said people want to know where their money is going.

” I need a much more detailed breakdown of the cost and how it is going to save us money.”

Lehman said in a regional structure, and as the big urban centre in the county, Barrie ends up paying the largest share of these projects. The mayor emphasized he isn’t looking for any special consideration, but feels the scale of the commitment means the City should be satisfied around project costs. Lehman notes his concern around costs were shared by others such as Collingwood and Bradford West Gwillimbury.

Orillia’s tab is about $6 million.

“There are a lot of pieces that some members of council didn’t fully grasp.”

Staff told councillors the residential component is going to cost about $60 million and the commerical portion will cost $20 million.

The goal is to have the Orillia project constructed by 2022/23.