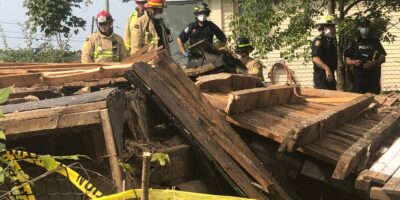 Barrie Police said the victim in Saturday’s house collapse was a 77-year-old man. In an update to their investigation, police on Sunday said the man owned the home and was in process of demolishing it when he was killed.

An investigation is underway after an elderly man was killed in the collapse of a home in south Barrie early Saturday afternoon.

Fire Chief Cory Mainprize said it appears the home, on Yonge Street south of Little Avenue, was under some sort of demolition or renovation.

Mainprize said firefighters removed part of the roof to extricate the person.

He said the outside walls pushed out and the roof came straight down. The Fire Chief described it as a ‘pancake collapse.’ Firefighters found the individual trapped in the middle of the building.

“They disassembled part of the roof. They cut some access holes and removed some rafters and were able to access the patient that way.” said Mainprize.

Firefighters cut access holes to make sure nobody else was in the structure.

Several neighbours said a man had been in the process of tearing down the home over a period of time.

Barrie Police spokesman Peter Leon said it appears the house was not occupied or being lived in at the time of the collapse.

“Our officers at the scene will be assisted by our Forensic Identification Unit along with Detectives from the Criminal Investigations Division in order to determine exactly what happened.” said Leon, in an email to Barrie 360.