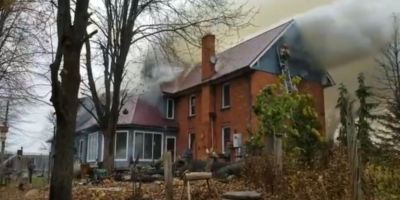 A fire at a century home near Bond Head did about a million dollars in damage, while authorities say there were no injuries.

New Tecumseth Fire Services was called out to a home on the 9th Line near Highway 27 shortly before 1:00 Wednesday afternoon, to find the home fully engulfed in flame.

House fully engulfed. Initial details are that nobody was home. @NewTecFireChief is on scene along with @adjalafire assisting.
9th line New Tech closed at 20th Sr and Hwy 27.
Updates to follow.
^cw pic.twitter.com/KkIs7Bz49L

Nobody was home at the time of the fire, and no injuries were reported after the blaze.

New Tecumseth Fire Chief Dan Heydon tells Barrie 360 the damage was so extensive that a cause may not be determined. He adds fire services from Bradford, King City, Innisfil, and Adjala-Tosorontio assisted in fighting the fire, as did the OPP and Simcoe County Paramedics Services.