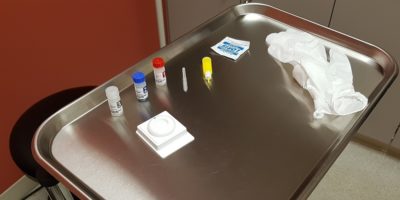 Everyone is invited down to Barrie City Hall this Thursday to mark National HIV Testing Day with a few drops of blood.

That’s all it takes to take the Rapid HIV test, and plenty of folks are expected to do so from noon to 5:00 at the City Hall courtyard, as part of an awareness get-together presented by The Gilbert Centre.

National HIV Testing Day was first marked on June 27, 1995, and has since devoted a day to encourage people to know their status. The Gilbert Centre’s Randy Davis knows his status; he’s been living with HIV for years, and likens it to other chronic diseases. “As a matter of fact it’s easier to manage than Diabetes. I’m not constantly checking my sugar levels, I take a pill every morning and that keeps me at an undetectable viral load. It keeps me safe and my partners safe.”

Davis is the Gilbert Centre’s Gay Men’s Sexual Health Coordinator and is the organizing force behind the gathering at City Hall Thursday. He points out that, while the event is being held during Pride Month, everyone is welcome to get tested. After all, HIV doesn’t discriminate. “It’s not a gay disease. That’s certainly a common misconception, but there are many women and children living with HIV not only in our country but across the world as well. There’s a large demographic people of colour affected by HIV. Indigenous populations are disproportionately affected by HIV as well.”

He says the key to curbing infection rates is knowing your status. “On average, we understand there is roughly 70,000 folks living with HIV in Canada. Of those 70,000, 14% are living with HIV and don’t know it. And that is how HIV continues to be perpetuated.”

The test, provided by the Simcoe Muskoka District Health Unit, takes less time to perform than it would to find a parking spot at City Hall Thursday; SMDHU health practitioners will be on hand at the event to perform the discrete test. A sampling of blood is taken and mixed with three other solutions, providing a result within a minute or so. The point-of-care test tests for antibodies in your blood only, not the disease itself, but is considered 99% effective.