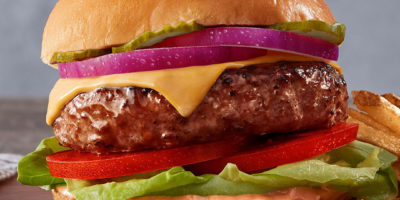 Plant-based meats are gaining popularity for their reduced impact on the environment. But are they actually healthier than meat? Not necessarily.

“Just because something says it’s plant-based doesn’t mean it’s healthy. So you do have to read the labels,” CBS News’ Dr. Tara Narula told “CBS This Morning.”

The first thing to pay attention to is what’s actually in them. Two of the most popular meat alternative companies are Impossible Burger and Beyond Burger which are available in 40,000 restaurants and grocery stores combined. While they use relatively similar ingredients, they do differ in key components of their proteins.

The Beyond Burger is made with ingredients like peas, mung beans and rice while the Impossible Burger includes soy protein concentrate, coconut oil and sunflower oil. One of the major differences, though, is that Impossible Burger claims they’ve discovered what makes meat tastes like meat and have recreated it. It’s called heme, an iron-containing molecule that all animals and plants have.

All that said, it doesn’t mean it’s necessarily healthier than meat. For example, the burgers are relatively similar in terms of calorie count with lean ground beef, Impossible Burger and Beyond Burger all clocking in around 250 calories per patty and 20 grams of protein. The plant-based meat also has a fair amount of sodium and saturated fat.

“About 6 to 8 grams (saturated fat) and the recommendation is to have 13 per day,” Narula said. “So 6 to 8 is already a fair amount. And then they all have no cholesterol. So, you know, they are relatively healthy. It’s not something you’d want to put in your diet every single day but you can build it in.”

Another interesting thing to note about these plant-based proteins: They’re marketing to meat-eaters — not vegetarians.