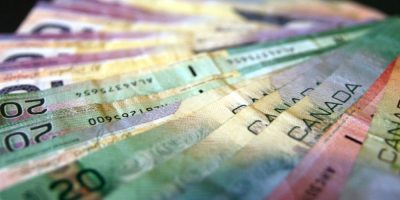 The Bank of Canada raised its key interest rate target for the first time since slashing its benchmark rate to its rock-bottom level at the start of the COVID-19 pandemic.

The central bank increased its key rate by a quarter of a percentage point to 0.5 per cent in a bid to help fight inflation which is at its highest level since 1991.

The higher rate is expected to prompt the country’s big banks to raise their prime lending rates, a move that will increase the cost of loans such as variable-rate mortgages that are linked to the benchmark.

The Bank of Canada cut its key interest rate to the emergency level of 0.25 per cent in March 2020 in an effort to help the economy weather the economic shock of the pandemic.

Since then, the economy has rebounded and inflation has jumped with the central bank saying today that it now expects inflation to be higher in the near-term than it previously thought.

The annual inflation rate in January of 5.1 per cent marked a three-decade high.

The Bank of Canada previously forecast annual inflation for the first quarter would be 5.1 per cent, but that was before Russia’s invasion of Ukraine sent oil prices higher and created new supply disruptions that will add to global price pressures.

The bank said persistently elevated inflation raises the risk that Canadians start to expect that inflation will stay higher for longer.

To keep inflation and expectations anchored, the bank said it plans to use interest rates to get inflation rates back to its two per cent target.

Senior decision-makers at the bank expect interest rates will need to rise further, although the timing and pace of those hikes will be tied to how the bank views the Canadian economy.

Statistics Canada said Tuesday that the economy grew at an annual rate of 6.7 per cent over the last three months of 2021, which was stronger than the Bank of Canada had expected.

The bank also expects growth in the first quarter to be more solid than its previous projections in January, even with an Omicron-related setback that month that saw 200,000 jobs lost.

The bank said the labour market setback should be temporary, and strong household spending should strengthen further as public health restrictions ease as several provinces have started to do this month.

Still, the bank said COVID-19 and the possibility of new variants remain a concern.

The Bank of Canada has raised its trendsetting policy rate to try and cool inflation. Here’s a breakdown of what the rate does, and what an increase — likely the first of multiple rate hikes this year — mean for households, businesses and governments.

What is the key policy rate and what does it do?

The key policy rate, also known as the target for the overnight rate, is the interest rate the Bank of Canada wants commercial banks to charge when lending each other money overnight so they settle balances at the end of each day. Knowing how much it will cost to lend money between institutions, or deposit money with the Bank of Canada, helps set commercial interest rates charged on things like loans and mortgages.

How does a rise in rates cool inflation?

The key rate is also the Bank of Canada’s biggest tool to manage inflation. When the economy is in a downturn and inflation rates are low, the bank lowers the rate to promote spending. Raising rates has the opposite effect by cooling spending when inflation rises above the Bank of Canada’s comfort zone of between one and three per cent. Changes in the rate can have some immediate impacts, but the effect on inflation rates usually takes between six and 18 months to appear.

What does a rate increase mean for households and businesses?

Rates.ca and Ratehub.ca note that homeowners with variable rate mortgages are likely to see an increase in mortgage payments since the prime interest rate charged by banks generally moves with the central bank’s key rate. For those with a fixed-rate mortgage, the impact of higher costs won’t arrive until renewals in the coming years.

Royce Mendes, head of macro strategy with Desjardins, said higher central bank rates tend to dampen demand for homes and durable goods like cars, appliances and home electronics, all of which consumers have been spending heavily on during the pandemic.

Mendes says a lone rate hike won’t do all that much to change spending habits immediately. It will likely take more hikes and a drop in virus transmission to cool spending on goods as part of a shift to oft-restricted in-person services.

Does this have any effect on federal finances?

In its fall economic update, the federal government said a one percentage point increase in interest rates decreases the budgetary balance by $4.9 billion in the first year, $5.8 billion in the second year, and $6.4 billion in the fifth year as borrowing costs would increase.

Rebekah Young, Scotiabank’s director of fiscal and provincial economics, says a general rule-of-thumb is that an increase of 0.25 per cent in the Bank of Canada’s overnight rate typically dampens economic growth by about 0.1 percentage points. Lower growth, she says, would quickly overtake higher interest as the key driver of any deterioration in the government’s balance sheet.