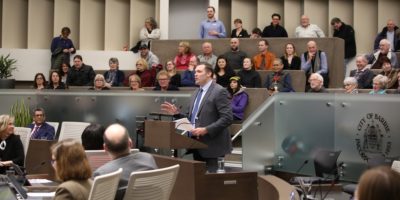 Alex Nuttall is calling for a plan before declaring any health crises but supports Barrie doing so.

The Barrie-Springwater-Oro Medonte MP was in front of council Monday to say the municipality has the power to declare a Public Health Emergency over the number of opioid-related deaths recently, but if ducks aren’t in a row, it won’t go anywhere. “It seems to be that we should act in the following order: One, create a plan. Two, apply for funding to support the plan through the existing streams of the provincial and federal government. Three, write a letter identifying any funding gaps that may exist. And finally, implement our plan to tackle the illegal drug overdose epidemic that is consistently taking the lives of people within our community.”

Nuttal does point out that Barrie need not wait for the province to agree. “The Province of Ontario does not need to sign off on your declaration of emergency” Nuttall told Council Monday night, “they only sign off on what they will do to help you, and can declare a provincial emergency within your borders. You are the owners of your own destiny when it comes to a declaration of emergency.” Nuttall points out that requesting funding with no parameters would result in no new resources committed.

Last week, a pair of rookie councillors tabled a motion that would see Barrie declare the opioid crisis in the city a Public Health Emergency.

The MP has previously been a vocal opponent to supervised injection sites within Barrie, claiming a proposed downtown site would be ineffective in combating the city’s opioid abuse problem. This runs contrary to the Simcoe Muskoka District Health Unit, who is proposing such a site in the city’s downtown core as a means of combating the opioid issue.

Numbers from the Simcoe Muskoka District Health Unit, also presented at City Hall Monday evening, show a sharp increase in the number of RVH emergency room visits due to opioid overdose. The Health Unit says the number of opioid-related deaths increased 70 per cent from 2016 to 2017.