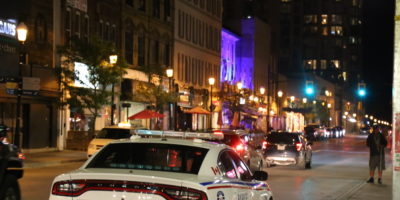 Under Ontario’s Emergency Management and Civil Protection Act, Barrie’s authorities have the power to fine people found to be violating physical distancing guidelines. After Monday evening’s order by Premier Doug Ford to close all playgrounds and the like, that means this can be enforced at Barrie’s parks.

While Barrie Police and the City of Barrie’s By-law officers have the ability to hand out fines, it doesn’t mean they will. “Always the first thing to do in the case of someone who isn’t distancing is tell them not to and explain why it’s important, so they don’t do it again,” said Barrie Mayor Jeff Lehman.

According to the province’s emergency act, law enforcement officers have the power to lay a fine of $750 against any group of five or more (with exceptions for families larger than five) for a first offense. That number jumps to $1,000 if you’re preventing someone else from maintaining a safe distance. Organizations or businesses accused of violating physical distancing orders can be fined up to $500,000. These fines can be handed out at an officer’s discretion.

As of Monday evening, there are no reports of fines being handed out to residents. Councillor Mike McCann says we’re not pushing hard enough. “I understand that we’re a forgiving city, forgiving country, but I’d like to get an explanation on why we’re not being more aggressive in on-the-spot fines,” said McCann, “I’m downtown once or twice a day, keeping my distance, but I see groups together every single time, and the message just isn’t getting out there enough.”

“If you gather outside in more than five people, that can be enforced,” said Mayor Lehman, “No, we can’t give you a ticket for being four feet away from the person in front of you in line at the grocery store rather than six feet. We still have to ask everyone to do that and push how important it is to do that. But violating the Ontario Emergency Order, which is law, we can now enforce that.”

Related: “Don’t be an idiot,” Barrie’s mayor calling out those who removed caution tape around city’s closed parks

“I will say our police were called on a number of occasions around this,” he added.

Barrie Police confirm a few calls have come in regarding concerns about people not following rules around social distancing. “We are taking the approach we want the public to be well informed,” said Barrie Police spokesman Peter Leon. “We have the legal authority and the ability to lay charges if it is warranted.”

Leon said they had a call about a large crowd that had gathered on Sunday, which was after Saturday night’s announcement by the province that gatherings of more than five people was prohibited, down from 50. Rather than lay charges, officers explained the new rules, which Leon said those in attendance were unaware of and they decided to deal with their situation in another way.

He said it is a technological world and people should be taking full advantage. “Use technology to communicate and not the old fashioned way.” said Leon.