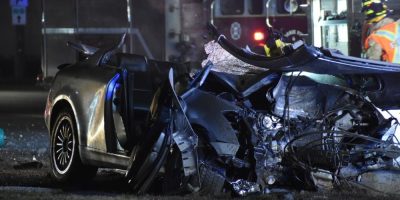 The province’s police watchdog is investigating a crash in Barrie that seriously injured four people.

The Special Investigations Unit (SIU) said around 8:30 p.m. on Sunday, officers in a cruiser spotted the driver of a silver car speeding on Yonge Street at Mapleview Drive East. The car fled northbound on Yonge Street before it crashed into a cement pole at Yonge Street just north of Big Bay Point Road. Four people were taken to the hospital.

The SIU is seeking any witnesses or dashcam footage of the car fleeing police before it crashed into the pole.

The SIU is urging anyone who may have information about this investigation, including video or photos, to contact the lead investigator at 1-800-787-8529 or online at: https://siu.on.ca/en/appeals.php