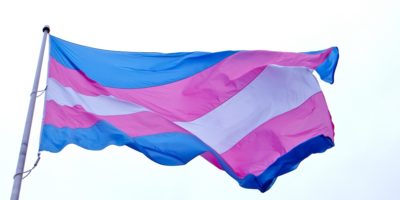 A flag-raising at Barrie City Hall on Wednesday afternoon, to mark Transgender Day of Remembrance.

Barrie Mayor Jeff Lehman hoisted the flag at 1:30 this afternoon, where it will stay all weekend long. He had help from Esen Mau, who said a few words before the raising. “Last year, 331 people passed in the trans community, and that’s all homicides,” said Mau. “It drives home the importance of making public what’s going on and the persecution in the community.”

Mau points out the City of Barrie was the second in the country to raise the Trans Flag, “Barrie Mayor, Jeff, and city council have been outstanding,” said Mau, “when they were approached to raise it, there were no issues.”

Mau told Barrie 360 that, while City Council recognized the importance of the flag-raising, the city as a whole may not be aware of it. “They don’t know that maybe next door someone’s being murdered, they don’t know that a small portion of the community is having big troubles just because they’re trans. If you don’t bring these issues forward, how can the general public know and say ‘hey we don’t want this in our community, we need to take action.'”

A vigil was also expected for 4:00 Wednesday afternoon at the Gilbert Centre at 80 Bradford Street, hosted by the support group Trans Q. “We’ll just pray that no more die and everyone can just live their life.” said Mau.

Trans day of remembrance is an annual awareness effort, started in 1999 to honour transgendered people lost to violence and hate.