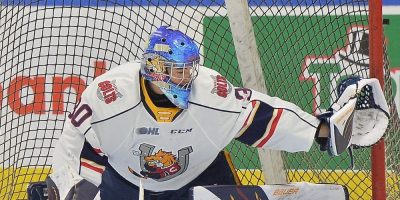 They may have not been exactly pretty, but the Barrie Colts will gladly take the two wins they ground out this weekend.

Fresh off a 5-4 come-from-behind shootout win at home over the Niagara IceDogs the night before, the Colts clawed their way back for 4-2 win over the Sudbury Wolves, Sunday afternoon, at Sudbury Community Arena.

Jacob Frasca, back from a two-game suspension, tied the game at 2-2 with a power-play goal 2:51 into the third period and then five minutes later Cooper Matthews walked down the left side and ripped a short-side shot past Sudbury goalie Mitchell Weeks for the game-winner.

Evan Vierling’s empty-net goal with just 24 seconds remaining iced it for the Colts (10-7-2-0), who have now won three-time of their last four games.

“That’s what it takes sometimes,” said Colts captain Brandt Clarke on the gritty weekend wins. “It’s nice to have big wins, but sometimes you got to battle and you got to come away with chippy ones and that’s what we did.

“We actually played a real solid game today. They had a couple of breaks that they bared down on, but I think overall it was a good game and we deserved this one.”

It was a better effort overall for the Colts than Saturday’s lacklustre win over the IceDogs.

“I thought last night was a lot uglier,” Colts head coach Marty Williamson said. “I thought (Sunday) we were in control and had some good chances. Their goalie played well. I thought we hung in there. We gave up a couple and we hit the crossbar at one end and they go down and hit the post at the other end and they push it in.

“We got kind of got deflated and then came out and played a good third period and found a way to win.”

It was a solid effort, especially considering the Colts had to hit the road on a quick turnaround from Saturday night and were missing forwards Hunter Haight and Ryan Del Monte while resting starting goalie Mack Guzda.

“Absolutely, Williamson said of having to grind this one out. “We were missing some guys and I thought Frasca did a really good job coming back for us. There was some real good signs there. I thought the guys played hard.

“They’re coming off (a game) where they’d given everything and that’s what I’m most impressed about that our battle was real good.”

The pair of wins come against Central Division rivals, which mean that much more in the standings. The Colts moved five points ahead of the Wolves and handed them only their third loss (7-3) on home ice this season.

“Coming in here on a short rest with a bus trip is an impressive thing,” Williamson said. “I was real pleased with our guys. A lot of teams are coming in here and had the excuse of a quick turnaround and travel, and we kind of said before the game we’re not going to make any excuses. “We’re going to win or lose this game on how we play.”

Nicholas Porco, with his fifth goal in his last three games, had the lone goal of the first, but Sudbury (8-13-1-0) got second-period markers from rookies Quentin Musty and Matthew Mania to grab the lead heading into the final frame.

Barrie would find the offence it needed and just as importantly got some big saves from Matteo Lalama to get the win.

“He was phenomenal for us,” Clarke said of Lalama. “He had a couple of games off, but there was no rust there. He got right back in and made huge saves for us, especially late. There was some Grade ‘A’ chances they had and he shut the door.

“It’s a really good feeling when you got two good goalies that we trust in between the pipes.”

“Lalama played a heck of a game for us and we needed some big saves at the right time and he did it for us,” Williamson said.

Clarke continued his hot play of late and with another two assists, Sunday leads all OHL defencemen in scoring with five goals and 23 points in 17 games.

The Colts captain has failed to get a point in only three games this season and has five goals and 12 assists in his last 12 games.

The Los Angeles Kings prospect is being counted on heavily this season and he’s delivered early on.

“He sure is,” Williamson said. “Brandt just has that knack of finding the open guy, the right guy, and he’s doing a real good job. He’s also doing well defensively. That was our challenge to him, not to sacrifice defence just to get flashy with offence.”

For his part, Clarke feels he’s playing the best of hockey of his junior career right now.

“I’m making a lot of plays, it almost feels like the game is kind of slow for me,” he said. “I can do big plays that I want to, and I can hold on to the puck when I want to. I can make those long stretch passes when I want to.

It won’t be long until Barrie sees Sudbury again. After hosting the Hamilton Bulldogs on Thursday night, the Colts travel back to Sudbury on Friday, before completing the home-and-home set back in Barrie on Saturday.

“It’s a good little rivalry,” Williamson said. “It was heated at times out there and I’m sure that will continue.”

ICE CHIPS: On the injury front, Haight left Saturday’s win over Niagara and is expected to miss a couple of weeks with an upper-body injury. Del Monte missed both weekend games and is expected to miss all three games this week. . . Colts outshot the Wolves, 34-28. . .Barrie went 2-for-6 on the power play while holding Sudbury scoreless on its four chances. . . Williamson now has 249 career wins in seven seasons behind the bench with Barrie.