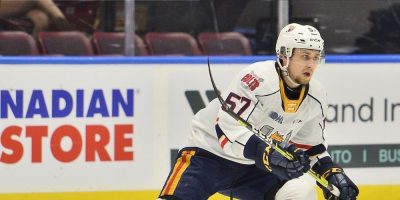 Sometimes it takes less than three minutes to determine an outcome of a hockey game.

The Barrie Colts found that out the hard way Thursday night.

The Owen Sound Attack scored four times just 2:41 apart late in the first period and then managed to hang on for a 4-3 win over the Colts at Sadlon Arena.

A combination of bad turnovers and lacklustre play by the Colts led to goals by Gavin Bryant, Deni Goure, and a pair from Servac Petrovsky in a forgetful opening period they wouldn’t recover from.

“I thought for most of the first period we weren’t ready,” Colts head coach Marty Williamson said after the game. “I didn’t like our game. They were faster than us, and it took a wake-up call.

“It was a whole period and the final three minutes are the ones that kind of bit us in the rear end.”

Evan Vierling’s deflection off a point shot by Artur Cholach gave Barrie (8-7-2) the lead nearing the midway part of the opening period, but a sloppy, sluggish start would catch up to them.

“We came out and had a slow start and were trying to find our legs in that first period, and they kind of took it to us,” Colts defenceman Matthew Sredl said.

While the Colts didn’t cut into the Attack (9-7-1-1) lead in the second in what was a much better period for the home side, that momentum carried into the third and they were rewarded for it.

Nicholas Porco got things rolling just 2:39 in on a beautiful individual effort.

The overager raced down the right-wing and blew around Owen Sound defenceman Sam Sedley, before cutting in front and tucking the puck past the outstretched right pad of Nick Chernard.

A little less than seven minutes later rookie Beau Jelsma muscled Madden Steen off the puck just inside the Attack blue line and waltzed in before ripping one short side to make it 4-3.

Ethan Cardwell came close to tying it in the final minute when he took a feed from Porco in the crease, but with Chernard down and out he lifted the puck over the crossbar.

“We kind of said if we could get a couple and give ourselves an opportunity, and we did. Unfortunately, we missed that opportunity at the end there.”

Barrie certainly had their chances to erase that nightmare first period.

“Yeah, we did,” Sredl said. “That was a good push by more of our veteran players and, yeah, just a tough bounce (on Cardwell). Usually, those have a tendency to go in, but that one didn’t and that’s hockey. It’s a game of inches.”

The early turnovers did Barrie in on this night. While a first intermission talk helped in that regard, the damage had been done.

“We had too many turnovers in the first,” Sredl said. “We came in here as a group and we were like, ‘we got to stop turning pucks over and start chipping it past the other team and getting it deep.’ We started doing that and we started getting chances, and we got a couple of goals off of that.”

The game also marked goaltender Mack Guzda’s first start against his old team after being acquired last week, but the Colts fell short in getting him the win.

“Absolutely,” Williamson said when asked if they wanted this one for Guzda. “We talked about turnovers and three out of the four goals in the first period were turnovers. We had the puck on our stick and we could have made better plays and we turned it over, so that’s our own doing to some extent.

“Owen Sound is very good and they make you pay. They play a good defensive game and make you pay with your mistakes.”

The Colts received a huge scare late in the third when Brandt Clarke was levelled on a check from behind by Stepan Machacek. Clarke, who didn’t have the puck, was plowed headfirst into the sideboards.

Clarke stayed down for five minutes before leaving the game. Machacek drew just a two-minute minor.

“It’s one of those things it’ll be how he feels tomorrow and that kind of stuff.” said Williamson, who didn’t see the play. “Watching him take his (equipment) off and he’s by himself, so I don’t think it’s too serious. We’ll see how stiff he is (Friday).”

The Colts are back home on Saturday when they host the Niagara IceDogs, before wrapping up a busy weekend on the road Sunday afternoon against the Sudbury Wolves.

Sredl would love to have the Owen Sound game back, but he’ll take his team’s effort that was there in third into Saturday.

“We need to build off of that,” he said. “Come back home here Saturday against Niagara and play just like we did in the third period.”

ICE CHIPS: Jacob Frasca served the first of a two-game suspension he was handed late in last week’s win against Niagara. The Colts were also missing rookie defenceman Beau Akey who left this week to take part in the 2021 U17 Capital City Challenge in Ottawa. The four-team tourney replaces the Word Under-17 Hockey Challenge which is cancelled due to the pandemic. . . Barrie outshot Owen Sound, 35-28. . . The Colts stayed out of the penalty box all game, while going 0-for-2 on the power play. . . Porco drew an assist to go with his goal and now has six goals and eight points over his last six games.