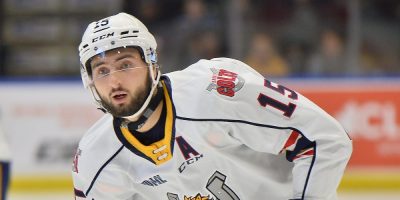 A little more than a week after taking it on the chin from the Steelheads, the Barrie Colts returned the favour Sunday afternoon in Mississauga.

Brandt Clarke had two goals and two assists for four points and Jacob Frasca scored twice as the Colts got some payback with a convincing 6-2 win at the Paramount Fine Foods Centre.

The last time the Colts made the trek south to face their Central Division rivals they were handed a disappointing 5-1 loss that snapped their 11-game point streak.

This time around, the Colts built a 4-2 lead in a wild opening nine minutes and then locked it down.

The regulation loss to Mississauga is the lone one in the last 16 games for Barrie.

“We came ready to play in the first and potted a few goals early and then locked it down defensively,” said Frasca, who now has a career-high 18 goals on the year. “There were a few minutes where our structure broke, but at the end of the day we played like we could.

“We prepared on our defensive end and our defence had a good game. Clarke and (Braden) Haché and all those guys were able to make plays back there and we were able to hold the lead.”

Beau Jelsma, who also added two helpers, and Carter Lowe also scored for Barrie (22-10-4-2), which has won four straight and has 12 wins in its last 16 games.

Mason Zebeski and Innisfil native James Hardie, with his 26th of the season, scored for Mississauga (18-17-4-0), which now trails Barrie by 10 points for second place in the Central.

“I thought, even though we were up in the first period, that we played the same kind of game when we lost 5-1,” said Colts general manager and head coach Marty Williamson. “We turned the puck over a ton, we didn’t execute, but the nice thing that I really liked was we were able to adjust and reel it back in.

“I thought we played really good in the second and third. Fortunately, we had the lead and it’s nice to see.”

While the fast offensive start put them on top, the wide open, run and gun style of play was the opposite of the solid defensive game that has been responsible, in large part, for Barrie’s recent success.

“We were playing like individuals out there,” said Williamson. “We had 20 Brandt Clarkes out there and everybody wanted to make a high-end play and never chip the puck. We didn’t support the puck very well.

“Then I thought we started to support the puck, play well in the second period and then period and carried on really until the last couple of minutes after the fight.

“They had two shots the entire period and then ended weaselling in a few more at the end there, but it was a real good period.”

Clarke’s four-point effort moved him past the 100-point career point mark to 103. The Los Angeles Kings prospect now has two goals and four points in three games and has been precisely what the Colts had hoped for since returning from the world juniors.

“He makes a big difference obviously,” Frasca said of the Colts captain. “He’s an elite player and he’s going to be playing in the NHL next year, and it makes a lot of difference when he has the puck. He makes plays out of nothing and he’s able to create.

“The last two games he only had two assists, but he could have got two goals and another two assists like today. It’s nice to see him get rewarded.”

The Colts also put the charge back in a struggling power play of late. After going 0-for-14 in their last five games, they scored three times on five chances on Sunday.

“(Assistant coach Phillip Barski) challenged them before the game. We hadn’t been real good,” said Williamson. “Seeing some pucks go to the net on the power play is a real positive for us and games like this when you’re playing three games in four days, three-in-threes those (power-play goals) make the difference and allowed us to get the win today.”

Barrie sits fourth overall on the power play with a 24.1 per cent efficiency (33 goals on 137 chances).

“Obviously, we had the addition of Clarke and he’s made a big difference back there,” said Frasca, whose two goals came on the man advantage. “Last game and the game before we had lots of chances and lots of looks. I think last game (3-1 win Saturday over the Soo) we had nine shots on the power play and 15 scoring chances.

“We took advantage today and had the three power-play goals. It really helps us a lot.”

A busy January schedule continues Tuesday night when the Colts take on the Attack in Owen Sound.

The week gets tougher with home dates against the OHL-leading Ottawa 67’s on Thursday and Shane Wright and the Windsor Spitfires on Saturday.

The stretch over these two weekends is a “real test” for a Colts team that has been red hot.

“It sure makes it easier when you’re winning. You feel good about yourselves,” said Williamson. “We’ll have a light skate (Monday) and we got team pictures and then get back on the horse.

“Owen Sound is a tough building to win in and then, obviously, we got Ottawa and Windsor coming to town. They’re great tests and it’s keep pushing and take one period at a time.”

Game time at the Harry Lumley Bayshore Community Centre on Tuesday is 7 p.m.

ICE CHIPS: Ben West made 25 saves to pick up his first win in goal since Dec. 13. “West did a good job for us,” said Williamson. “He was a little rusty in that first period, but I thought he really settled in and was solid.”. . . Vierling had two assists and sits tied for 11th overall in scoring (19-30-49) with Connor Lockhart and Ty Nelson. . . Williamson made some lineup changes, bringing in Lowe, Grayson Tiller and giving Ethan Quick his first start with Barrie since being acquired at the OHL Trade Deadline earlier this month. “I thought those guys did a real good job,” he said. “Tiller was real strong on defence for us and I thought Lowe and Quick did a real good job on the fourth line. Everybody is pushing. There’s good competition now to get into the lineup, so that’s always a healthy thing too.”