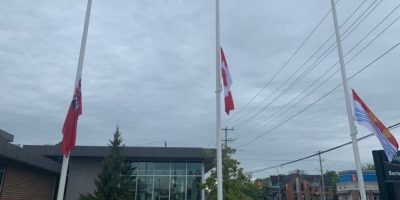 Gone, but not forgotten.

Flags at fire stations in Barrie are at half-staff to mark the 20th anniversary of the death of firefighter Bill Wilkins.

He lost his life on May 27, 2002 when he entered a burning house in the northwest part of the city, on Sinclair Court near Livingstone and Anne Streets.

Wilkins was overcome by smoke in the lower half of the residence and crews were unable to find him.

At the time of his death, Wilkins was 32-years-old and was engaged to be married.

Banner image: Flags at half-staff outside Barrie fire hall on Dunlop Street West on May 27, 2022 in memory of firefighter Bill Wilkins/Barrie 360 image