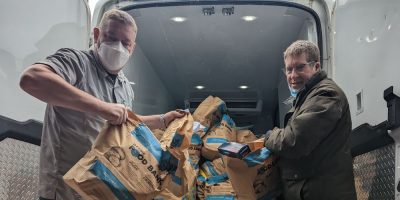 The Barrie Food Bank set a goal of raising 150,000 lbs of food and $150,000 during their Thanksgiving drive, and they did just that and more.

“We sort of got back to broader community involvement,” Palmer told Barrie 360. “So in the past, we’ve had a history of working with the service clubs, the schools and the churches in particular. And this was the first time in a couple of years that we’ve been able to broadly engage those groups and have their support again at the same level that we have seen.”

Palmer says they’ve been lucky to be part of a community that has groups going out and supporting one another.

Though a successful drive is always needed, it may be even more so now.

Palmer says the food bank saw a 100 per cent increase year-over-year in October in the number of people accessing their service – roughly 3,300 – and added that September looked similar.

“What we’re seeing more of is people who are employed, particularly minimum wages or gig economy, who are not able to meet their bills with the income that they’re making,” Palmer said. “That’s a new group that is perhaps a change from the past with more employed people looking for support for food.”

She added, saying they are also seeing more students, while people on social assistance continues to be a trend, and a concern, which includes seniors and people on Ontario disability support, and Ontario Works.

The executive says she could physically see the increase over this recent period.

“We’re seeing 80, 90, 100 people in a day,” Palmer said. “And just in terms of the volume of people coming through the door and the level of support that we have to have from a volunteer perspective, we’re definitely looking to have extra people on our shifts to be able to keep up.”

A bright spot is the food bank has seen a steady flow of donations throughout the pandemic, and into now.

In early October, Palmer said they are also focusing on food recovery, working with grocery stores and farmers to get more food donations to keep up with demand.

To learn more about how to donate, visit the Barrie Food Bank website.

You can also drop off items at the Barrie Food Bank at 42 Anne Street South, Unit 2 behind Pioneer Family Pools. (Entrance for food donations is located at the end of Army, Navy, Airforce Drive).