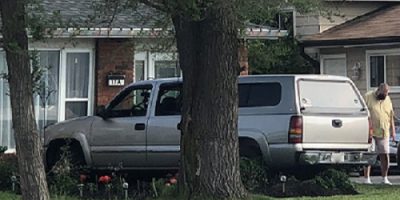 No injuries were reported after a truck mounted the curb and struck a home on Cundles Road East near Bayfield Street on Friday afternoon.

Barrie Police spokesperson Peter Leon told Barrie 360 that Alectra was called in because there was hydro-related damage.

He said a structural engineer would be needed to assess damage to the home.

The motorist was charged with careless driving.