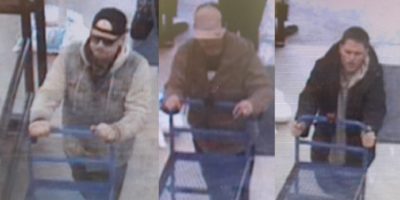 Barrie Police are looking for information on three suspects accused of stealing thousands of dollars worth of cough drops and energy drinks.

Investigators were called to the Real Canadian Wholesale Club store on Yonge St. near Minet’s Point Rd. around 3:00 Monday afternoon with reports of a theft. Officers say three men entered the store that afternoon; two of them are accused of loading their cart with cases of Hall’s and Fisherman’s Friend cough drops, while a third allegedly loaded a cart with Red Bull drinks. All three left the store, and police say no attempt to pay was made. It was later determined the value of the products taken amounted to $9,350.

Police say the getaway car stood out; a white van had distinctive vertical crosses painted on the taillights in white spray paint, with red/white reflective tape along the bottom of the rear doors.

The van was followed from the store by a witness and it was last seen heading southbound on Highway 400.

The suspects being sought are described as:

Suspect #3: a white male, 25-25 years, medium build, dark short hair, with a black jacket over greyish hoodie with hood down, and dark pants.

If you can help identify either of these three individuals or the van involved, please contact Constable Brent Osborne of the Barrie Police Service at 705-725-7025 ext. 2783 or bosborne@barriepolice.ca. Any information can be provided anonymously to Crime Stoppers at 1-800-222-TIPS or leave an anonymous tip online at www.p3tips.com.