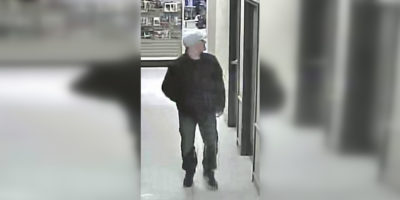 Barrie Police say a man accused of stealing merchandise from a south-end clothing store was armed with a knife.

Investigators say a man went into the Winners store at Barrie’s Park Place on January 27th and filled a cart with clothing. An employee who approached told polcie he was holding a knife. Police spokesperson Peter Leon said no threat was made, either verbally or physically.

The suspect is described as being a white male in his mid 30’s, about 5’8″ in height with a medium build, and a shaved head. He was wearing a black jacket, jeans, and a ball cap.

If you have any information about this suspect, contact aanderson@barriepolice.ca