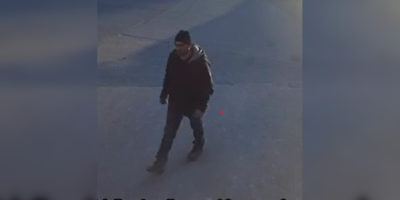 Barrie Police hope to speak to a suspect caught on camera after a company vehicle was swiped from a home improvement shop.

Investigators were called to the Rona parking lot on Mapleview Drive on March 26th, after it was discovered one of the company’s vans had been stolen. It had been parked in a northwest portion of the lot for advertising purposes.

Police say the following day, someone used the van to steal gas from an Innisfil service station, and wasn’t seen again until April 2nd. the van was located in the rear lot of the Kozlov Mall on Bayfield Street. Aside from some damage to the driver’s side door lock, the vehicle was otherwise undamaged, and all the contents were present.

Officers have since been able to track down security camera footage of a man wanted in connection to the theft of the van and gas; he is described as:

Anyone who may have information to please contact the Barrie Police Service at 705-725-7025 ext. 2634 or email the investigating officer at mmellish@barriepolice.ca. Information can also be provided anonymously to Crime Stoppers at 1-800-222-TIPS or you can leave an anonymous tip online at www.p3tips.com.