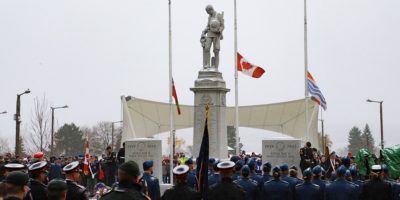 Thousands of people packed Barrie’s Memorial Square on November 11th to pay homage to those who paid the ultimate price.

Remembrance Day ceremonies in the city began after 10:00 Monday morning, with a sombre parade that marched along Dunlop St. from Mulcaster to the Cenotaph.

A moment of silence and some kind words spoken by dignitaries, all in tribute to Canada’s war dead. One of those in attendance today was Bob George, and having served three tours as a Peacekeeper in the Middle East and the Congo, says one of the best ways to pay respects to veterans is to visit many of the memorials established in their honour. “Such as Peacekeeper’s Park in Angus,” says George, “where we pay tribute to all the Peacekeepers who have been killed in UN-sanctioned missions. That’s a good way to keep it alive, is to visit these many memorials; look them up on the Internet and then go visit them.”

Barrie’s Georgian College took time to pay tribute to the nation’s veterans today, joining in on the moment of silence at 11:00 today, along with the traditional reading of In Flander’s Fields.

In Flanders fields the poppies blow
Between the crosses, row on row,
That mark our place; and in the sky
The larks, still bravely singing, fly
Scarce heard amid the guns below.

We are the Dead. Short days ago
We lived, felt dawn, saw sunset glow,
Loved and were loved, and now we lie
In Flanders fields.

Take up our quarrel with the foe:
To you from failing hands we throw
The torch; be yours to hold it high.
If ye break faith with us who die
We shall not sleep, though poppies grow
In Flanders fields.