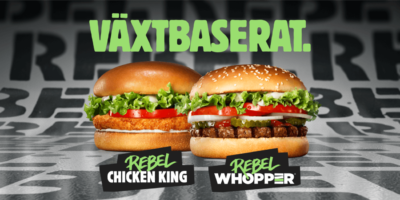 Would you know the difference between a beef burger and a veggie burger?

Burger King in Sweden is guessing you won’t.

The burger chain recently introduced two plant-based, meatless sandwiches in its restaurants in Sweden, called the “Rebel Whopper” and the “Rebel Chicken King.”

It’s offering a promotion with a 50-50 menu. When you order a burger, they’ll randomly give you a beef burger or a plant-based burger. They’re betting that you won’t be able to tell the difference and you’ll have fun trying to figure out which one you got.

Burger King will eventually tell you which kind of burger you got, but only if you first scan the sandwich box with the Burger King app, and make a guess.