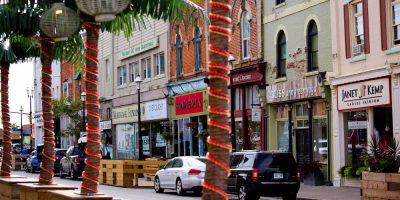 Extending the patio program in downtown Barrie has the potential to jeopardize the completion of the Dunlop Streetscape project, according to Andrea Miller, the city’s General Manager of Infrastructure and Growth Management.

“I’m concerned that this is something that is a bigger challenge than anybody anticipated when we received the first request for the extension.”

Patios have been a financial lifeline for businesses in the core and Downtown Barrie Business Association (BIA) General Manager Kelly McKenna says they are seeking an extension of the program probably until the end of November.

The patio program ended Oct. 19th. This allowed businesses to tap into the last Saturday of the Open Air Dunlop pilot project.

Miller says the request for an extension initially came from Flying Monkeys Craft Brewery that was forwarded to the City with the support of the BIA.

The request came late in the game for council to deal with at Monday’s General Committee meeting so the City decided not to enforce against any patios that have stayed open this week.

The request for an extension will be tackled at the City Council meeting on Oct. 26th.

In an interview with Barrie 360, Miller had yet to complete her memo of things councillors will need to consider when making their decision.

Completion of the Dunlop Streetscape project could be impacted if the extension gets the green light.

“Final things on the docket right now are the final asphalt paving,” says Miller. “And we need a significant number of weeks to get that paving done.”

She has had a discussion with the BIA about the Dunlop project.

Miller expects to outline in her memo that she gets there are some patios that would like to stay open.

“How many of them are there? What does the BIA think of that versus the potential delay for Dunlop?”

Other matters Miller says council will have to think about is the fact Barrie is in the snowbelt and it’s not unusual to have winter events at the end of October or early November.

Miller has been talking to the Operations Department and a hybrid solution is a possibility if patios are allowed to stay open and there is snow. She says it might be something along the lines where patios would have to be removed with 48 hours if there is a snow event in the forecast to clear the road.

The City also has a downtown sidewalk clearing bylaw that requires snow and ice to be cleared by 10 a.m. Miller says that needs to be adhered to regardless of what happens to the patio program.

McKenna says some patios have infra ray heat already installed and others are thinking about creative ways to warm up the outdoor space.

“I think this year because of where we are with the pandemic we’re really just looking to extend a bit of a lifeline to our businesses down here, to give them that extended patio season, and at the same time, using it as a bit of pilot project to see if there are patios open what would patio owners need with regards to heat or enclosures.”

McKenna doesn’t expect any opposition from City Council to extend the patio season. She says the patios allow businesses to give their customers another option.