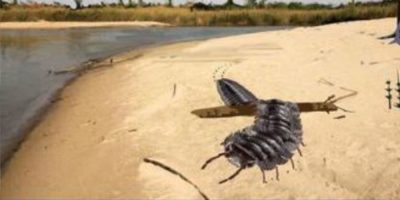 Before dinosaurs, it was giant bugs that roamed the Earth, or at least northern England, scientists say. In a new study published on Tuesday, scientists confirmed that a fossil discovered in 2018 is that of a massive millipede “as big as a car,” measuring nearly 9 feet long.

A roughly 29.5-inch piece of the giant invertebrate was discovered in a block of sandstone next to a coastal cliff in northern England’s Northumberland beach in January 2018. The Arthropleura fossil is only the third such fossil ever discovered, and according to researchers, is the largest and oldest. The creature dates back about 326 million years, more than 100 million years before dinosaurs.

When it was alive, researchers estimate, the bug measured roughly 8.8 feet long and weighed more than 110 pounds. Their findings were published in the Journal of the Geological Society.

“Finding these giant millipede fossils is rare, because once they died, their bodies tend to disarticulate, so it’s likely that the fossil is a moulted carapace that the animal shed as it grew,” Neil Davies, lead author of the study and researcher at the University of Cambridge’s Department of Earth Sciences, said in a statement. “We have not yet found a fossilized head, so it’s difficult to know everything about them.”

Scientists believe the millipede only existed in areas near the equator, including Great Britain during the Carboniferous period, and preferred open woodland habitats near the coast. This type of millipede is believed to have existed for roughly 45 million years before going extinct.

Davies said it’s unclear exactly how the creatures became so large, but that researchers think their diet may have played a role.

“While we can’t know for sure what they ate, there were plenty of nutritious nuts and seeds available in the leaf litter at the time,” he said, “and they may have been predators that fed off other invertebrates and even small vertebrates such as amphibians.”

The giant millipede fossil will be on display at Cambridge’s Sedgwick Museum starting in 2022.