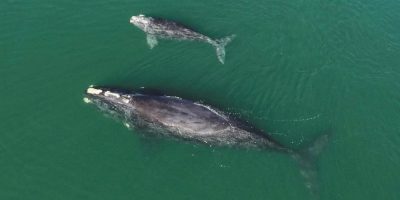 Scientists who study the endangered North Atlantic right whale are cautiously optimistic about the current breeding season after nine calves were spotted during its first few weeks.

Moira Brown, senior scientist with the Canadian Whale Institute, said fewer than 100 of the 340 surviving animals in the waters along Canada’s eastern coast are mothers.

“Every calf is valuable,” she said. “It’s a little bit of hope for the future. The last 10−to−12 years have been pretty hard on right whales.”

The interval between one birth and another is usually three to five years, but more recently scientists have seen that window expand to between seven and 10 years, Brown said.

Boris Worm, an expert in marine conservation at Dalhousie University in Halifax, said the number of calves has varied over the years.

“Since we’re not at the end of calving season, we’re kind of midway, and we already have nine, so we’re hoping to see some more and hopefully meet or exceed 20 calves,” he said.

“That would be very good news indeed because we haven’t really seen those kinds of numbers over the last decade.”

Brown said another point of concern in recent seasons has been the lack of first-time mothers, which supports research showing a downward trend in the number of females capable of breeding.

“The fertility of the whale does correlate with changes in the abundance of their food and distribution. And their food source has collapsed since 2000,” he said.

“The thought is that maybe the abundance or quality or concentration of food is not as good and therefore, the mothers are not as fertile. They can’t produce as many babies as they did in the 2000s.”

But this season’s births suggest the mothers have had the kind of food needed to sustain a pregnancy, he said.

Right whales feed on zooplankton that is low down in the food chain and made up of tiny crustaceans that in turn eat phytoplankton, the algae that turn the ocean green, he said. But for whales to have a nutritious diet, he said they need high concentrations of this food that may not always be available.

That there have been nine babies so far this season shows there is enough food, which is a good sign, Worm said.

Around 2010, Brown said scientists noticed a shift in right whales’ habitat from around the Gulf of Maine, which includes the Bay of Fundy and south of Nova Scotia, to the Gulf of St. Lawrence.

“I give the right whales a lot of credit,” she said. “They found food elsewhere, which is good.”

Worm speculated the “very low” birth numbers between 2010 and 2018 came about while the whales were transitioning between habitats.

“They were just looking for a new supermarket, if you will,” he said with a laugh.

Now that some calves have been born, Worm said he worries about the treacherous environment they must navigate.

Ship strikes and fishing gear entanglements were the leading cause of death and serious injury for right whales between 2017 and 2022, and Worm said they pose the most pressing risks to the new babies.

“The calves are very naive. They haven’t learned yet that it’s a dangerous place for them,” he said.

Right whales are slow-moving and cannot easily manoeuvre when there is an approaching boat or ship, he said.

“They’re like slow-moving targets. Think about toddlers or children walking over a highway. That would be the situation of those calves going on the northwest migration and crossing many very busy shipping lanes into New York City and Boston and Halifax and the Gulf of St. Lawrence. Every single individual really counts towards the survival of the species.”