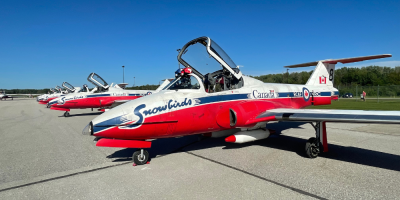 The F-18 Demo Team will be one of the many performers at this year’s show. Captain Jesse Haggart-Smith, who has been flying F-18s for over 4 years will be in the cockpit.

His performance will involve a series of aerobatic maneuvers to show off the F-18s capabilities. This includes its high alpha capability, slow speed ability and impressive maneuverability, as well as Jesse’s favourite maneuver – the Square Loop. During this demanding maneuver, Jesse will fly his jet straight up, flip over itself then fly straight towards the ground before recovering.

“The rush of pointing straight down to the ground, hurtling right towards it and waiting for that exact last minute to recover … that’s something that never gets old,” Jesse shared.

Attendees will also see the jet accelate near the speed of sound. Jesse explained, “I can’t quite reach it here, over the crowds, but the F-18 is a supersonic jet … when I am flying around, I go anywhere from 100 knots during slow speed maneuvers all the way up to about 600 [knots]. That would be about 1200 km/h over the crowd.”

The show will also have exhilarating aerobatic performances and air demonstrations by 8 other performers. This includes the Skyhawks parachute team, the US Military with their A-10s, the Northern stars with a new addition to the team and, of course, the Canadian Forces Snowbirds in their CT-114 Tutors.

While the Tutors have been around since the 1960s and 70s, their crew keeps them in excellent operating condition.

When speaking with the Snowbirds Crew Chief, Sergeant Richard MacGillivary, he explained, “We are constantly modernizing different aspects of the airplanes. As the aeronautical standards change, our technology has to change as well to keep up with it.

But it is also a long process. To change things from the way we did them 50 years ago to what the standard is now takes a lot of time, research and money. So there’s a process of selectively upgrading as we go along the lifecycle of the aircraft.”

Like many festivals and events over the past couple of years, the Borden Armed Forces Day & Air Show was put on hold. But this year, they’re returning with the biggest and best performer lineup to date.

“2018 is the last time we did a show. So you can say it has been 2 years of planning and 4 years in the making,” explains Lieutenant Aaron Niles, Public Affairs Officer for the event. “We want to go out into the community and showcase what we can do. The community gives so much to us, and in return we want to give back to them. We’ve done all we can the past 2 years to plan this event and make sure the show is the best it can be for everyone in attendance.”

There will also be plenty happening on the ground while the air shows take place. There will be free exhibits with military artifacts, vintage aircrafts, and military units. Kids will also be able to enjoy an obstacle course, as well as inflatable castles and slides. For a fee, attendees can take helicopter rides, relax in the VIP tent or enjoy tasty treats from local food vendors.

“We have 5 great local breweries competing against each other. People are going to be able to go into the tent, try one of each of the selections and vote on it. Whichever one comes out on top will be served on tap at all of our messes on Base,” Aaron explains.

While watching the teams practice earlier today, the wind quickly picked up, which was cause for concern. When asked about the wind speeds, Aaron explained, “The main concern for us is always the safety of the pilots. So even today, which is training day, we had to cancel the 4 o’clock flight for the Snowbirds and the Skyhawks flight.”

“For the pilots, [the wind] adds to the challenge. Flying the planes is hard enough as it is. As soon as there’s a great degree of wind and air turbulence it makes it more challenging to keep the formation tight and keep the show looking good.”

Richard continues, “There is a lot of extra care and concern, as well as care for the airframe itself when there are high wind shows like this. The planes operate close to their g-limit so we have to be cognizant of the conditions when doing the show so that we don’t over stress the aircraft. While the aircraft is allowed to operate at high wind speeds there is a specified limit for safety.”

Even with today’s winds, the outlook for the weekend’s event is still looking good. The team at Borden are currently tracking the wind speeds for Saturday and Sunday and right now it looks like it should be all clear.

However, Aaron reminds anybody coming to the show that there could be changes to scheduling. This could include scaling back or delaying flights. Regardless, Aaron assured us that “the show will go on in some way, even if adapted for the weather. Anytime that we see there’s a cancellation or an amendment to the schedule, we will make sure that everyone in attendance at the Air Show knows.”

If you are planning on attending the show, gates open at 9 AM Saturday, June 17 and Sunday, June 18. Parking is free but there will be a non-perishable food collection for those who would like to donate.

In addition to collecting food, Canadian Forces Base Borden will also be planting trees as part of the event. Aaron explains the significance of this:

“We always keep green energy in mind. We understand that the airshow is using a lot of fuel. So Canadian Forces Base Borden will be planting 2,000 trees to offset that.”

For those who haven’t purchased tickets, you can buy them online. If you prefer to buy them the day of, no worries. Pay at the gates and come to the air show – it’s sure to be a can’t miss experience.