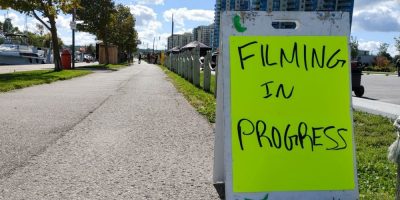 A whirl of camera crew activity was spotted at Barrie’s waterfront on Wednesday. The crew is in town as part of production for a movie called Fallen Angels Book Club. The movie stars singer Toni Braxton.

The movie, expected to be the first of two small-screen films, is based on a series of books by the same name, written by author R. Franklin James. Braxton is not only the executive producer of the project but will also play the lead character, Hollis Morgan.

In the book series, Morgan is an ex-con turned amateur detective who sets out to investigate the murder of a member of her book club.

The Fallen Angels Book Club movie is being produced by Toronto-based Brain Power Studio. According to the Alliance of Canadian Cinema, Television and Radio Artists (ACTRA), production is scheduled to take place until October 21, while on-location shooting at Barrie’s waterfront will wrap up as of Thursday, September 30.