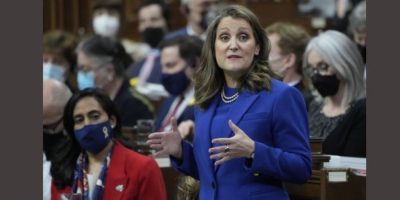 The Liberals have made good on promises to the NDP when it comes to health spending in their newly released budget, but offered little else in new spending to reinvigorate Canada’s struggling health system.

The government expects to launch a new dental program in 2022, starting with children under the age of 12 at an initial cost of $300 million.

The scheme laid out in the budget is a major tenet of the Liberal’s confidence and supply agreement with the NDP to keep the government in power until 2025. The budget closely mirrors the opposition party’s costed platform proposal from the 2021 election, though details about how it will work are still sparse.

The new program will be restricted to families with an income of less than $90,000, with no co-pays for those who make under $70,000 per year.

The plan is to expand eligibility to children under the age of 18, seniors and persons with disabilities in 2023. The government expects full implementation by 2025, with an annual cost of $1.7 billion.

In total, the government expects to spend $5.3 billion over five years on dental care.

The Liberals also committed to passing a legislative framework for a national pharmacare plan by the end of 2023 as part of their deal with the NDP, but did not set aside any funds for the program in the budget.

While the government contemplates adding to public health care, provinces and health workers have warned the existing system is crumbling and in desperate need of help.

Provinces have clamoured for the federal government to increase its share of health spending, with an immediate increase of about $28 billion, to shore up their struggling systems.

Health transfers to the provinces will increase in 2022, but not nearly to the degree provinces have asked for.

Currently, federal contributions to provincial health systems grow in line with a three-year moving average of nominal gross domestic product. Thanks to a sunnier economic outlook than expected, the transfers will rise by about 4.8 per cent.

In the budget, the government alludes to the possibility of further negotiations on health transfers, but says that money would have to be tied to government priorities like increased access to primary and mental health care.

Finance Minister Chrystia Freeland said Canada already spends a lot on health care compared to peer countries but doesn’t get better outcomes, which is why the government wants to take time to “do it right.”

The budget does not appear to respond to the near-frantic pleas from health workers for a plan to address a serious staff shortage, as burnt-out employees reduce their hours and leave the industry in droves.

The Canadian Federation of Nurses Unions said this budget was supposed to be the light at the end of a dark tunnel, when they would finally get a sign that things would change. But president Linda Silas says they were left disappointed.

“We’ve been telling all levels of government that we’re in a crisis situation, and we needed strong words today,” Silas said.

Canadian Medical Association president Dr. Katharine Smart said the budget identified some key areas of concern, but given the state of the system, action is needed.

The only new measures involve expanding loan forgiveness for doctors, nurses and other health professionals in rural and remote communities, as well as making it easier for foreign trained professionals to be certified in Canada.

The Public Health Agency of Canada will also get a $436-million boost over the next five years to track and assess the risk of viruses, flu and respiratory infections.

The government appears keen to wind down COVID-19 health spending beyond 2022, but has set aside $20 million to study the long-term impact of the virus on infected Canadians and Canada’s health-care systems.