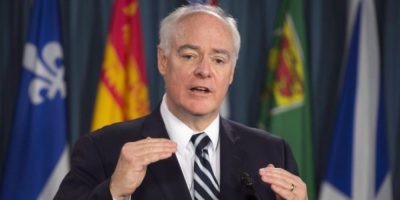 By Laura Osman in Ottawa, The Canadian Press

In the late 1980s, as then-defence minister Perrin Beatty was drafting new legislation to replace the controversial War Measures Act, one man’s words were on his mind.

The man was Robert Stanfield, the former leader of Beatty’s Progressive Conservative party and leader of the Official Opposition during the 1970 October Crisis. Pierre Elliott Trudeau’s Liberals invoked the War Measures Act for the first and only time outside of a war to end a series of kidnappings perpetrated by a militant Quebec independence group.

Though Stanfield made plenty of missteps during his 27 years in politics, he later famously said the one regret of his career was giving the government the benefit of the doubt on its use of the War Measures Act. He wished he’d dissented.

“This was one of the problems back in the time of the War Measures Act, where the government said in essence, ‘if only you knew what we knew, you’d support the invocation of the act,’” Beatty said in a recent interview.

“That was very much in my mind at the time that we brought in the new act. To ensure public confidence, you had to have the greatest level of transparency possible.”

Beatty’s efforts are now being tested, as the government launches an inquiry into the inaugural use of the Emergencies Act — without committing to release the details of closed-door discussions that led up to the act being invoked.

Prime Minister Justin Trudeau invoked the never-before-used Emergencies Act on Feb. 14 in an effort to quash blockades that had taken over the streets of the capital and major border crossings in protest against COVID-19 restrictions and the Liberal government.

In creating the Emergencies Act, Beatty said the government set out to create a new law with more checks and balances to curb potential abuses of power.

One of those checks was a mandatory inquiry, which must be launched within 60 days of the state of emergency being revoked.

On April 25, the government-appointed Ontario Appeal Court Justice Paul Rouleau to lead the inquiry and report back on lessons learned about how to avoid using the act in the future.

The announcement in the foyer of Parliament’s West Block kicked off a series of back-and-forths between government ministers, members of the opposition and media about the purpose of the inquiry and how much information Rouleau would have access to.

Public Safety Minister Marco Mendicino would not say if the inquiry would judge whether the government was justified in invoking the act in the first place, but Beatty said that was exactly the purpose of including a mandatory inquiry as part of the law.

“Was invoking the act the right thing to do in the first place? Did it meet the high threshold that was anticipated, that was required under the act?” Beatty said.

On Tuesday, Mendicino was met by a group of reporters before question period and was again asked whether the government intended to waive cabinet confidence — secret discussions intended only for ministers — for the sake of the Emergencies Act inquiry.

“We’ve afforded Justice Rouleau with the power to compel witnesses, information, and documents and, in fairness, we’ve contemplated that he would get access to classified information,” Mendicino said.

He added the government looks forward to collaborating with the judge “so that we can be transparent,” but since Rouleau hasn’t asked for any classified information yet, nothing has been decided about what to release.

Beatty, who has sworn off partisan comments since leaving politics, wouldn’t offer any specific words of advice to the government about how to make sure the country gets an honest and open look at cabinet’s actions.

He said he can only speak to what was intended when the legislation was passed.

“The only thing that I can say, as the author of the act, is that wherever you have extraordinary powers, there must be extraordinary accountability,” he said.

Before the new legislation replaced it, the War Measures Act was used three times in history: during the October Crisis, and First and Second World Wars.

The old legislation allowed for human rights abuses, like the incarceration of Japanese Canadians during the Second World War, Beatty said. The goal of the Emergencies Act was to figure out how to protect civil rights of Canadians even under the most dire circumstances.

So it included protections like an expiry date on the government powers, a requirement for parliamentary approval, recourse options through the courts, and the mandatory inquiry.

It’s entirely possible that the inquiry will be able to make conclusions without interfering with cabinet confidence at all, but ultimately it’s up to the government to be transparent enough to convince Canadians that it made the right choice, Beatty said.

“If you don’t have (transparency), then people will always have their suspicions that something has been withheld,” he said.

“‘Trust us’ is not enough if you want public confidence at the end of the day,” he said.

Feature image – Perrin Beatty speaks during a news conference in Ottawa, Monday October 5, 2015. Former defence minister and author of the Emergencies Act Beatty says the extraordinary powers granted under the act were intended to be met with extraordinary accountability on the part of the government – The Canadian Press – Adrian Wyld.