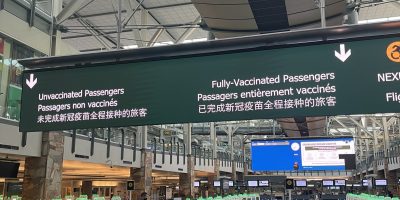 In a move described as necessary for “a smoother and safer process” for travellers, Canada’s two busiest airports have now begun segregating passengers based on their vaccination status.

Pearson International Airport in Toronto began separating international arrivals this past weekend following an earlier move by YVR in Vancouver to erect ‘unvaccinated’ and ‘vaccinated’ signage.

“Passengers entering Canada from the U.S. or another international destination may be split into vaccinated and non/partially-vaccinated queues prior to reaching Canada Customs,” says Beverly MacDonald, Senior Advisor, Communications with the Greater Toronto Airports Authority.

MacDonald tells us that different entry requirements for vaccinated and non/partially-vaccinated travellers “have been broadly communicated by the Government of Canada.”

The Montreal-Trudeau International Airport did a trial run earlier this month but has since stopped, telling the Montreal Gazette “the separation did not yield the anticipated outcome.”

Currently, fully vaccinated Canadians don’t have to quarantine when they arrive back home in the country.

Travellers from the United States, who are fully vaccinated, will no longer have to quarantine come August 9, 2021, while fully vaccinated international travellers will be allowed to enter Canada in September.

Asking for proof of vaccination at the border raises questions around the controversial issue of vaccine passports and if they should be used.

Prime Minister Justin Trudeau said back in March he was reluctant to introduce a system of vaccine passports in Canada because of lingering concerns about inequities — but such a system might be necessary for international travel.

Trudeau said people wouldn’t get vaccinated for many reasons, but not necessarily through a personal or political choice, but rather valid medical reasons.

Meantime, for the second weekend in a row, thousands of protesters took to the streets in central Paris on Saturday to voice their opposition to a proposed bill requiring vaccine passports to enter and restaurants and various venues.

During some of the various demonstrations in France, anti-riot Police clashed with groups of protesters, reportedly using tear gas and water cannons.

President Emmanuel Macron has already said that compulsory vaccination for all health workers will take effect in September.

France 24, reports that over 160,000 people took part in protests on Saturday.